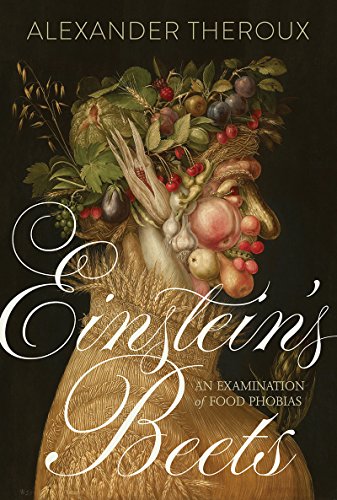 This is a prose nonfiction book about food and food aversions throughout history.

Britney Spears loathes meatloaf and “all lumpy stuff.” Arturo Toscanini hated fish. Ayn Rand despised salads. Alexander Theroux’s Einstein’s Beets is a study of the world of food and food aversions. The novelist and poet probes the secret and mysterious attitudes of hundreds of people―mostly famous and well-known―toward eating and dining out, hilariously recounting tales of confrontation and scandalous alienation: it contains gossip, confession, embarrassment, and perceptive observations. Prose. About the Author:

Alexander Theroux is an award-winning novelist, poet, and teacher whose prose works include Laura Warholic or, The Sexual Intellectual, Estonia, and the two artist monographs The Strange Case of Edward Gorey and The Enigma of Al Capp. His novel Darconville’s Cat was chosen by Anthony Burgess as one of the 99 greatest post-war novels. He lives in Massachusetts with his wife and children.