Items related to Elmer Bernstein's The Magnificent Seven: A Film... 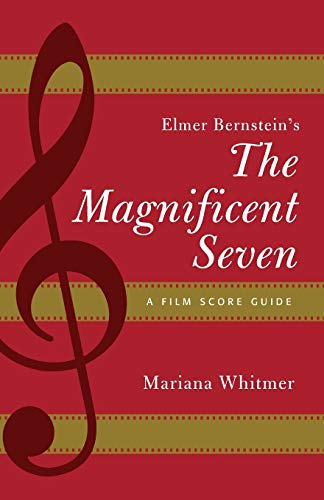 The Magnificent Seven was a Western reimagining of the 1954 Japanese film Seven Samurai. Despite such stars as Steve McQueen, Yul Brynner, and Charles Bronson, the film was not terribly successful when it premiered. However, in the years since, the film has become recognized as a classic of the genre. And though the movie received only one Academy Award nomination, that honor was bestowed on Elmer Bernstein’s rousing score. Beyond the scope of the film, the score has permeated American culture: the music has been used in countless commercials and referenced on television shows like Cheers and The Simpsons. But what makes this score so memorable?
Elmer Bernstein’s The Magnificent Seven: A Film Score Guide, Mariana Whitmer examines the creation and development of one of the most iconic soundtracks in the history of cinema. Whitmer explores the significance of the familiar score through a variety of lenses, first delving into the background of Elmer Bernstein and his emergence as one of the key composers of the Silver Age of film music. The author then traces Bernstein’s early musical endeavors and considers why he was attracted to “Americana” music, which particularly influenced his scoring of The Magnificent Seven. The book also summarizes Bernstein’s early Western scores, noting that although they are clearly in the mainstream of the genre’s musical style, they are also enhanced by Bernstein’s own distinctive touches.
Providing unique insights into the creation of this iconic score—which was deemed one of the ten greatest film scores of all time by the American Film Institute—this book explains what makes this music so enduring. Elmer Bernstein’s The Magnificent Seven: A Film Score Guide will be of interest to cinema and music scholars in general, as well as to fans of film music and the work of one of Hollywood’s finest composers.