Items related to An Engine, Not a Camera

Home MacKenzie, Donald An Engine, Not a Camera
Stock Image 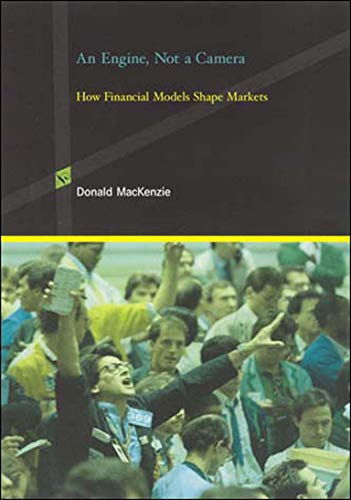 An Engine, Not a Camera

2008. 1st. Paperback. A pioneering work in the social studies of finance describes how the emergence of modern finance theory has affected financial markets in fundamental ways--as an engine that shapes them rather than a camera that reproduces their every detail. Series: Inside Technology. Num Pages: 392 pages, 10 illus. BIC Classification: KCA; KFF. Category: (P) Professional & Vocational; (UP) Postgraduate, Research & Scholarly. Dimension: 227 x 155 x 21. Weight in Grams: 530. . . . . . Books ship from the US and Ireland. Bookseller Inventory # V9780262633673

Title: An Engine, Not a Camera

In An Engine, Not a Camera, Donald MacKenzie argues that the emergence of modern economic theories of finance affected financial markets in fundamental ways. These new, Nobel Prize-winning theories, based on elegant mathematical models of markets, were not simply external analyses but intrinsic parts of economic processes.

Paraphrasing Milton Friedman, MacKenzie says that economic models are an engine of inquiry rather than a camera to reproduce empirical facts. More than that, the emergence of an authoritative theory of financial markets altered those markets fundamentally. For example, in 1970, there was almost no trading in financial derivatives such as "futures." By June of 2004, derivatives contracts totaling $273 trillion were outstanding worldwide. MacKenzie suggests that this growth could never have happened without the development of theories that gave derivatives legitimacy and explained their complexities.

MacKenzie examines the role played by finance theory in the two most serious crises to hit the world's financial markets in recent years: the stock market crash of 1987 and the market turmoil that engulfed the hedge fund Long-Term Capital Management in 1998. He also looks at finance theory that is somewhat beyond the mainstream―chaos theorist Benoit Mandelbrot's model of "wild" randomness. MacKenzie's pioneering work in the social studies of finance will interest anyone who wants to understand how America's financial markets have grown into their current form.

Donald MacKenzie is Professor of Sociology (Personal Chair) at the University of Edinburgh. His books include Inventing Accuracy (1990), Knowing Machines (1996), and Mechanizing Proof (2001), all published by the MIT Press. Portions of An Engine, not a Camera won the Viviana A. Zelizer Prize in economic sociology from the American Sociological Association.