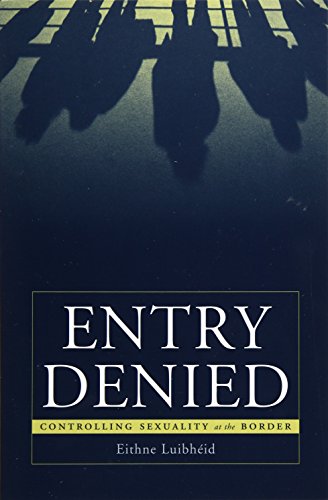 Synopsis: Lesbians, prostitutes, women likely to have sex across racial lines, "brought to the United States for immoral purposes, " or "arriving in a state of pregnancy" -- national threats, one and all. Since the late nineteenth century, immigrant women's sexuality has been viewed as a threat to national security, to be contained through strict border-monitoring practices. By scrutinizing this policy, its origins, and its application, Eithne Luibheid shows how the U.S. border became a site not just for controlling female sexuality but also for contesting, constructing, and renegotiating sexual identity.

Initially targeting Chinese women, immigration control based on sexuality rapidly expanded to encompass every woman who sought entry to the United States. The particular cases Luibheid examines -- efforts to differentiate Chinese prostitutes from wives, the 1920s exclusion of Japanese wives to reduce the Japanese-American birthrate, the deportation of a Mexican woman on charges of lesbianism, the role of rape in mediating women's border crossings today -- challenge conventional accounts that attribute exclusion solely to prejudice or lack of information. This innovative work clearly links sexuality-based immigration exclusion to a dominant nationalism premised on sexual, gender, racial, and class hierarchies.

Book Description Paperback. Condition: GOOD. Spine creases, wear to binding and pages from reading. May contain limited notes, underlining or highlighting that does affect the text. Possible ex library copy, will have the markings and stickers associated from the library. Accessories such as CD, codes, toys, may not be included. Seller Inventory # 3451984602

Book Description Condition: Good. . . All orders guaranteed and ship within 24 hours. Before placing your order for please contact us for confirmation on the book's binding. Check out our other listings to add to your order for discounted shipping. Seller Inventory # BOS-I-02e-01465

Book Description Condition: Good. Your purchase helps support Sri Lankan Children's Charity 'The Rainbow Centre'. Ex-library, so some stamps and wear, but in good overall condition. May contain underlining and/or highlighting. Our donations to The Rainbow Centre have helped provide an education and a safe haven to hundreds of children who live in appalling conditions. Seller Inventory # Z1-V-024-01806

Shipping: US$ 13.37
From United Kingdom to U.S.A.
Destination, rates & speeds

There are 28 more copies of this book