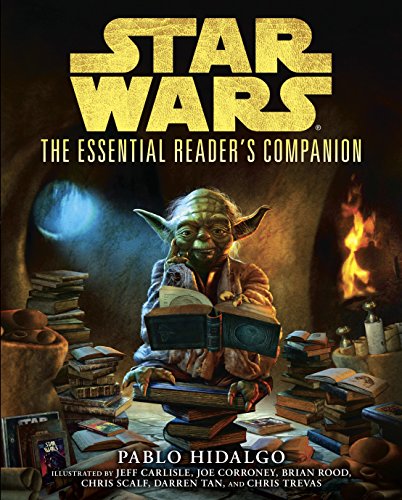 The legendary motion picture Star Wars has spawned two big-screen sequels and three prequels—and decades of bestselling fiction. From the original movie tie-in novel through the monumental Fate of the Jedi series, legions of devoted readers have helped expand science fiction’s most celebrated film saga into a page-turning print sensation. Now, for the first time, a comprehensive overview of these sweeping Star Wars adventures is presented in one beautifully illustrated volume.

· a concise synopsis of each story, including key characters and planets
· exclusive behind-the-scenes facts and anecdotes about authors, plot and character development, continuity notes, and significance in the Star Wars Expanded Universe
· details on which novels are linked to Star Wars comic books from Dark Horse and Marvel
· a chronological listing of titles, spanning the 25,000-year history of the Star Wars universe and placing each story in its proper context
· more than one hundred full-color original paintings throughout by some of fans’ favorite  artists

Whether skimming through fateful eras from the Old Republic to the New Jedi Order; delving deep into the ancient history of the Lost Tribe of the Sith or the tumultuous Clone Wars; crossing paths—and lightsabers—with Dark Lords such as Plagueis or Bane, Sidious or Vader; helming the Millennium Falcon with Han Solo; or mastering the Force with Luke Skywalker, this one-of-a-kind, one-stop reference is a must for fans looking to maximize their knowledge of the sprawling Star Wars Expanded Universe.

About the Author: Pablo Hidalgo is the brand communications manager at Lucasfilm, a resident Star Wars authority who helps ensure consistency across a wide array of Star Wars projects. He lives with his wife in San Francisco, California.

Jeff Carlisle is a freelance illustrator and concept designer who has spent a good portion of the last decade in a Galaxy Far, Far Away. He has designed or illustrated for various Star Wars projects, such as books, magazines, web comics, role-playing and miniatures games, trading cards, posters, art prints, sketch cards, and even paper airplanes.

Brian Rood is a freelance illustrator who spends most of his time creating new artwork for the Star Wars galaxy. His work can be found on numerous licensed Star Wars products, including toy packaging, Blu-ray packaging, trading cards, and a large assortment of Star Wars fine art reproductions with ACME Archives Direct. He lives in Southeast Michigan with his wife and two awesome children.

Chris Scalf grew up in Michigan, the middle child of a single mother. He didn’t have much so he thrived on his imagination. He began drawing his favorite moments from the science fiction and monster shows he loved watching on TV. Eventually a high school crush led to marriage and Chris’s desire to provide for his new family by making a living as an artist. In 2006 Chris was hired to paint his first Star Wars project, the R2-D2 mailboxes for the USPS. Today, Chris spreads his work between commercial art and advertising and the genre art he loved so much as a kid. He still lives in Michigan with his wife and daughter.

Darren Tan was born and raised in Malaysia where he grew up drawing spaceships, dinosaurs, and the stuff of his imagination, which was fueled by movies and computer games. Inspired by these, he went on to study animation and later graduated as a computer animator from Sheridan College, Canada. After a brief stint in 3-D animation, he decided to trade in polygons for a Wacom tablet. Now he works as a digital concept artist at Imaginary Friends Studios and is enjoying getting paid for his hobby. Apart from his passion for art and Star Wars, he is also a big fan of The Lord of the Rings and enjoys delving into medieval and church history. He now lives with his beautiful wife in sunny Singapore.

Chris Trevas is a freelance illustrator for Star Wars books, games, trading cards, packaging, and many other products. His book credits include four Star Wars: Essential Guides for Del Rey as well as several Star Wars technical guides and blueprints.

Book Description Del Rey, 2012. Paperback. Condition: Good. Connecting readers with great books since 1972. Used books may not include companion materials, some shelf wear, may contain highlighting/notes, may not include cdrom or access codes. Customer service is our top priority!. Seller Inventory # S_280496457

Book Description Del Rey, 2012. Paperback. Condition: Good. Connecting readers with great books since 1972. Used books may not include companion materials, some shelf wear, may contain highlighting/notes, may not include cdrom or access codes. Customer service is our top priority!. Seller Inventory # S_281736052

Book Description Lucas Books, 2012. Paperback. Condition: GOOD. Has little wear to the cover and pages. Contains some markings such as highlighting and writing. Seller Inventory # 0345511190_abe_gd