Items related to The European Unions Democracy Promotion in Central... 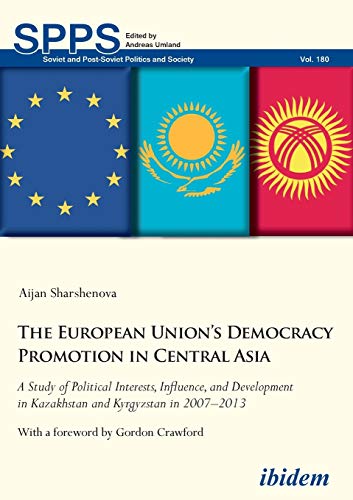 The European Unions Democracy Promotion in Central Asia: A Study of Political Interests, Influence, and Development in Kazakhstan and Kyrgyzstan in (Soviet and Post-Soviet Politics and Society)

Brussels made democracy, human rights, the rule of law, and good governance its top co-operation priorities in the EU Strategy Framework towards Central Asia for 2007–2013. This book examines two interrelated questions: To what extent has EU democracy promotion in Central Asia been successful? And, to the extent that it was successful, why was it so?
The book presents a comprehensive analytical framework for the evaluation of democracy promotion, including factors which may facilitate or hinder democratic development in Central Asia. It demonstrates the validity of a holistic approach to analyzing impediments of democracy promotion meaning that external pro-democratic support is affected by a variety of diverse factors whose impact can vary as international, regional, and domestic conditions change.
The stable and rich authoritarian state of Kazakhstan is different from the much poorer Kyrgyzstan—a state prone to political instability, but also to democratic openings. By contrasting the success of democracy promotion in these two countries which have different strategic importance for the EU, this study provides valuable insights into how non-normative interests interfere with normatively driven policies.

Aijan Sharshenova studied political science at the Centre International de Formation Européenne at Nice, at the Institut für Europäische Politik at Berlin, and at the University of Leeds in the UK. She has worked as a policy analyst at the International Peace Institute, Middle East and North Africa at Manama, Kingdom of Bahrain, as well as in democracy and development assistance projects in Kyrgyzstan.