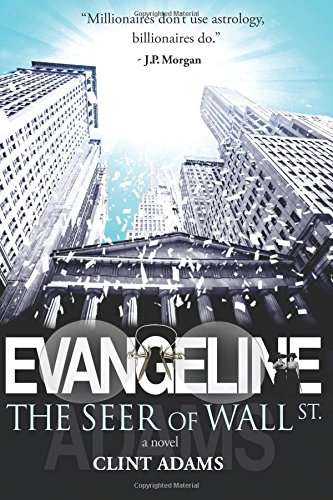 Evangeline: The Seer of Wall St.

Synopsis: The stars are infallible; one's true destiny cannot be altered. Or can it? A descendant of presidents John and John Quincy Adams, and the black sheep of her family, astrologer Evangeline Adams flees provincial Boston in 1899 to launch her business in New York City. On the train ride, she casts her own horoscopic chart. Her findings--death on November 10, 1932 and an unusual intimate union--alarm her. Soon after, she meets actress and suffragist Emma Sheridan-Fry, and she spends the rest of her life torn between society's restrictions and the trail-blazing nature that made her one of the most prominent female businesswomen of her time. Peopled with real historical figures, including J.P. Morgan, King Edward VII, Enrico Caruso, Rudolph Valentino, Charles Schwab, Mary Pickford, Charlie Chaplin, Sheridan-Fry (who was known to have been a "companion" of Evangeline's) and occult figure Aleister Crowley, Evangeline The Seer of Wall St. immerses readers in a New York populated with the Wall Street wealthy and the downtrodden, all of whom visited Evangeline's Carnegie Hall office.

From the Author: It's All Relative

In the summer of '62--after filling my tummy with paella at the Gates of Spain restaurant in Santa Monica--my great-aunt Pearl told me with pride, "Clinton Dean, you're a direct descendant of John and John Quincy Adams." Not knowing how to react to this info, nor to the sprawling family tree placed before me, I asked, "Can I eat my custard now?" after having studied the kiddie menu.

20+ years later, immediately upon meeting my captive scene partner, Jessica (Paul) Stanton in The Trojan Women at Cal, she asked, "So, what are you all about?" Flashing back to childhood for some reason, I responded, "I'm a direct descendant of John and John Quincy Adams." Jessica next said, "No kidding. Then you must also be related to Evangeline Adams." Busy adjusting my too-short and skimpy toga, I uttered back, "Who's that?"

The following year, atop the John Hancock Observatory in Boston, I looked out to the harbor where the Tea Party had taken place. Instigated by Samuel Adams; kin, troublemaker. I liked that. I liked him. For the first time I took 'being an Adams' seriously.

Decades later, now a writer, I reflected on a few back-burner projects waiting to be set free. There she was, my great-great _____, Evangeline Adams. Someone I believed to be a part of me.

From 2012-2015, thousands of hours of research, development and refinement went into EVANGELINE's twelve drafts.

Hiring a genealogist to determine the exact nature of my familial relationship to Evangeline Adams next became crucial. No way could I truthfully refer to Evangeline as my great, great-anything--once, twice or three times removed--if I wasn't certain.

Today I learned conclusively that I'm not related to Evangeline, John or John Quincy Adams. Disappointed? Absolutely. Regretful that I took on this project under false pretenses? Never. In this book, I got to pay tribute to one of America's first female entrepreneurs by relaying a story from a century ago that's equally as relevant today; a total privilege. Evangeline, this is for you.

1. Evangeline: The Seer of Wall St.

2. Evangeline: The Seer of Wall St.

3. Evangeline: The Seer of Wall St.