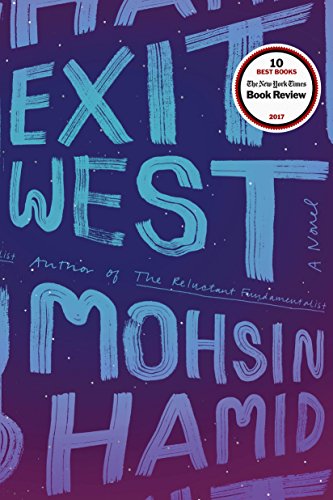 Quantity: 4
View all  copies of this book
Buy New
Price: US$ 9.03 Convert Currency
Free Shipping Within U.S.A.
Save on shipping

FINALIST FOR THE BOOKER PRIZE

WINNER OF THE L.A. TIMES BOOK PRIZE FOR FICTION and THE ASPEN WORDS LITERARY PRIZE

“A breathtaking novel...[that] arrives at an urgent time.” —NPR

“It was as if Hamid knew what was going to happen to America and the world, and gave us a road map to our future... At once terrifying and ... oddly hopeful.” —Ayelet Waldman, The New York Times Book Review

A New York Times bestseller, the astonishingly visionary love story that imagines the forces that drive ordinary people from their homes into the uncertain embrace of new lands.

In a country teetering on the brink of civil war, two young people meet—sensual, fiercely independent Nadia and gentle, restrained Saeed. They embark on a furtive love affair, and are soon cloistered in a premature intimacy by the unrest roiling their city. When it explodes, turning familiar streets into a patchwork of checkpoints and bomb blasts, they begin to hear whispers about doors—doors that can whisk people far away, if perilously and for a price. As the violence escalates, Nadia and Saeed decide that they no longer have a choice. Leaving their homeland and their old lives behind, they find a door and step through. . . .

Exit West follows these remarkable characters as they emerge into an alien and uncertain future, struggling to hold on to each other, to their past, to the very sense of who they are. Profoundly intimate and powerfully inventive, it tells an unforgettable story of love, loyalty, and courage that is both completely of our time and for all time.

An Amazon Best Book of March 2017: When Nadia and Saeed fall in love in a distant unnamed city, they are just like any other young couple. But soon bullets begin to fly, fighter jets streak the sky, and curfews fall. As the spell of violence spreads, they flee their country, leaving behind their loved ones. Early in Exit West, the author Mohsin Hamid explains that geography is destiny, and in the case of his two young lovers, geography dictates that they must leave. Hamid offers up a fantastical device to deliver his refugees to places: they pass through magic doors. Rather than unmooring the story from reality, this device, as well as a few other fantastical touches, makes the book more poignant and focused, pointing our attention to the emotions of exile rather than the mechanics. Surrounded by other refugees, Nadia and Saeed try to establish their places in the world, putting up different responses to their circumstances. The result is a novel that is personal, not pedantic, an intimate human story about an experience shared by countless people of the world, one that most Americans just witness on television. --Chris Schluep , The Amazon Book Review


Orders usually ship same or next business day. If you place an expedited order for a heavy or over-sized book, we may contact you to request that you cover the extra shipping cost.