Items related to In the Eye of Hurricane Andrew (Florida History and... 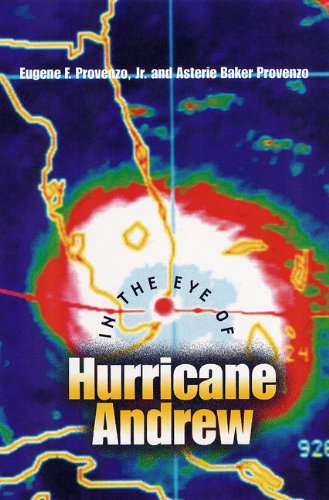 In the Eye of Hurricane Andrew (Florida History and Culture)

Title: In the Eye of Hurricane Andrew (Florida ...

"These personal accounts put a human face on history's grim statistics to capture how people felt and how they dealt with the most frightening experience of their lives. In the year of its 10th anniversary, In the Eye of Hurricane Andrew makes us all reflect back on this devastating event and its impact on the citizens of South Florida."--Stephen P. Leatherman, Director of the International Hurricane Center, Miami

Although Florida has been struck by more hurricanes than any other region of the continental United States, most people living in South Florida in 1992 had never experienced a hurricane. On August 24, in a matter of hours, Hurricane Andrew ravaged communities on the South Florida coast, leaving 250,000 homeless and physical damages of close to $30 billion. Based on interviews with survivors and rescue workers in the weeks and months that followed, In the Eye of Hurricane Andrew is the extraordinary story of one of the most destructive natural disasters in modern American history as told by the people who lived through it. From a psychological and social point of view, Andrew was unprecedented.

While the book relates the history of the storm and its consequences, its greatest strength is the personal level at which it engages the reader. Nearly 100 people representing diverse backgrounds share their experiences, from a mother who weathered the storm in a tiny bathroom shared with another adult, four children, and a dog, to a roofer who traveled from Tennessee to help in the rebuilding process, to Bryan Norcross, the TV weatherman whose voice guided many through the storm. Their testimonies create a real sense of how Andrew impacted each human being--the decision to evacuate or not, preparations, what happened during the storm, the clean-up, looting, price gouging, rebuilding, and living in the aftermath.

Providing a context for these oral histories, the book also draws upon a wide range of published sources such as newspaper and documentary accounts. A comprehensive bibliography includes government reports, conference proceedings, maps, and video recordings. Photos from the National Oceanographic and Atmospheric Administration supplement the engaging text to reveal the incredible before and after, testifying to the ingenuity and resiliency of South Floridians carrying on in the face of such devastation.

Eugene F. Provenzo, Jr., is professor of education at the University of Miami. Asterie Baker Provenzo is a widely published author of books on local, family, and community history. She has developed local history curricula for the Historical Association of South Florida.

Eugene F. Provenzo, Jr., is professor of education at the University of Miami. He has authored over 30 books on historical, educational, and social issues.

Asterie Baker Provenzo is a widely published author of books on local, family, and community history, including Pursuing the Past. She has developed local history curricula for the Historical Association of South Florida.