Skip to main content
Home Morales, Iris Through the Eyes of Rebel Women: The Young Lords 1969-1976 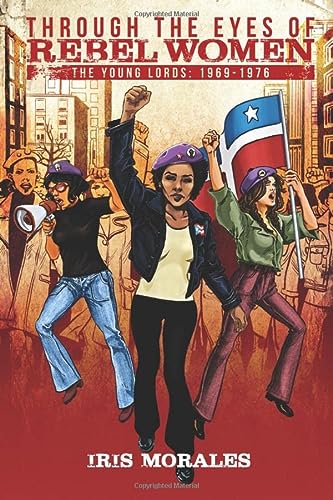 Connecting readers with great books since 1972. Used books may not include companion materials, some shelf wear, may contain highlighting/notes, may not include cdrom or access codes. Customer service is our top priority!. Seller Inventory # S_332230195

THROUGH THE EYES OF REBEL WOMEN: The Young Lords, 1969-1976 is the first account about the experiences of women members — a "story within a story" told from the inside out. The Young Lords emerged in the late sixties to fight poverty, racial and gender inequality, and the colonial status of Puerto Rico. Women joined to build a people's justice movement and fought the “revolution within the revolution” believing that women’s equality was inseparable from the society’s progress as a whole.

Written and edited by Iris Morales, THROUGH THE EYES OF REBEL WOMEN consists of essays, interviews, and primary source documents. Morales chronicles the revolutionary rise of the Young Lords, the role and contributions of women, the opening of branches in Puerto Rico, and the group's demise.

Dr. Edna Acosta-Belén, distinguished historian and women’s studies scholar, writes: “These women activists are ... the brave feminist warriors who battled for equality in intersecting (not isolated or separated) arenas of class, race, gender, ethnicity, and sexuality; part of that noble league of defenders of universal human rights.”

Ericka Huggins, human rights activist, former Black Panther Party member, and political prisoner, summarizes: “As I read this book, I was continually inspired by the history of the Young Lords and the great women within it. Iris Morales writes a story that parallels the story of the women in the Black Panther Party and women throughout the globe. The structural and interpersonal work we must do to uplift humanity always starts from the inside out!”

Through the Eyes of Rebel Women is a must-read for everyone interested in the Puerto Rican and people's movements of the 1960s and 70s in the United States.

About the Author: Iris Morales is an educator and life-long community activist. She brings her legacy of social justice activism to her projects with young people, teachers, and media producers promoting human rights and the decolonization of Puerto Rico. For thirty years, Ms. Morales has built organizations dedicated to grassroots organizing, community empowerment, and media. As the founder and executive editor of Red Sugarcane Press, she publishes books about the Puerto Rican and Latin@ Diasporas in the Americas.
Ms. Morales was a member of the Young Lords for five years serving as the organization's Deputy Minister of Education and a co-founder of its Women’s Caucus and Women’s Union. Her interviews and writings about the Young Lords have appeared in numerous books and magazines. She is also the producer, writer and co-director of the award-winning film, ¡Palante, Siempre Palante! The Young Lords, which premiered on public television and has screened across the United States and the Caribbean.
Ms. Morales is an attorney, a graduate of New York University School of Law, and earned an MFA in Integrated Media Arts from Hunter College in New York.

Book Description Condition: Very Good. Used book that is in excellent condition. May show signs of wear or have minor defects. Seller Inventory # 18148801-6

Book Description Condition: good. May show signs of wear, highlighting, writing, and previous use. This item may be a former library book with typical markings. No guarantee on products that contain supplements Your satisfaction is 100% guaranteed. Twenty-five year bookseller with shipments to over fifty million happy customers. Seller Inventory # 28638243-5

Book Description Paperback. Condition: Good. Ships in a BOX from Central Missouri! May not include working access code. Will not include dust jacket. Has used sticker(s) and some writing or highlighting. Ships same or next business day. UPS shipping for most packages, (Priority Mail for AK/HI/APO/PO Boxes). Seller Inventory # 002043169U

Book Description Condition: Good. A+ Customer service! Satisfaction Guaranteed! Book is in Used-Good condition. Pages and cover are clean and intact. Used items may not include supplementary materials such as CDs or access codes. May show signs of minor shelf wear and contain limited notes and highlighting. Seller Inventory # 0996827617-2-4