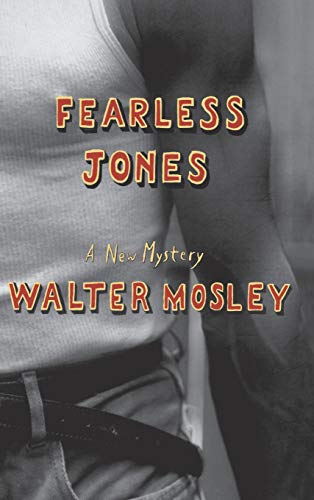 Signed and dated 7/21/1 by author on title page in black fountain ink. The first book in the Fearless Jones series. Paris Minton is minding his own business - a small used-book store of which he is the proud proprietor - when a beautiful woman walks in and asks a few questions. Before he knows it, Paris has been beaten up, slept with, shot at, robbed, and his bookstore has been burned to the ground. He's in so much trouble he has no choice but to get his friend Fearless Jones out of jail to help him. Things get scary fast as they look into this woman's past, and the more they learn, the harder it gets. Set in Los Angeles in the 1950's, Paris Minton and Fearless Jones fight with the few things they have - few rights, little money, and no recourse. Fearless Jones and Paris Minton are a fabulous duo to rival Easy Rawlins and his sidekick Mouse in popularity. Mosley is the winner of the 2016 Grand Master Award from the Mystery Writers of America. New, mint, first edition, first printing copy, in new, mylar-protected dust jacket.{Not remainder-marked or price-clipped} M90. Bookseller Inventory # 8445

Mosley returns to mysteries at last with his most engaging hero since Easy Rawlins. When Paris Minton meets a beautiful new woman, before he knows it he has been beaten up, slept with, shot at, robbed, and his bookstore burned to the ground. He's in so much trouble he has no choice but to get his friend, Fearless Jones, out of jail to help him.

Penzler Pick, June 2001: Those of us who have been waiting for Walter Mosley to return to mystery writing--and there are many of us--have cause to rejoice. Not only has Mosley written a mystery, he is introducing a new character who could turn out to be as popular as Easy Rawlins.

Fearless Jones has a lot in common with Easy, but he also has some characteristics reminiscent of Socrates Fortlow, the "hero" of Always Outnumbered, Always Outgunned. When the story begins, the reader is transported to the Los Angeles of the 1950s, a dangerous place and time for a black man. But Paris Minton seems to have beaten the odds. He owns a moderately successful and very satisfying business--a used book store. He spends the time he's not in the store scouring libraries for discarded books and selling them in just enough quantity to be independent and happy. Yes, he is visited on a regular basis by members of the LAPD who want him to prove to them that he did not steal the books, but that is a small price to pay for independence.

Minton's peaceful life is interrupted one day when a beautiful woman walks into his store and asks for the Reverend William Grove. In no time flat, Paris has been beaten into unconsciousness by a man following her and has been rewarded by the woman with sex. The lovely Elana Love is obviously trouble, but Paris jumps in feet first and, as a consequence, his store is burned to the ground. It is obviously time to call in Fearless Jones, a man well named. Jones is afraid of nothing, but there is a little matter to be taken care of before he can help. He's in jail and Paris must raise bail to get him out. Once he does that, the pair embark on a wild ride through Los Angeles on behalf of Elana Love. As always, Mosley depicts the hard-boiled L.A. in a powerful and distinctive way, and we can only hope that this is the first of a series. --Otto Penzler