Items related to FIRES OF EDEN 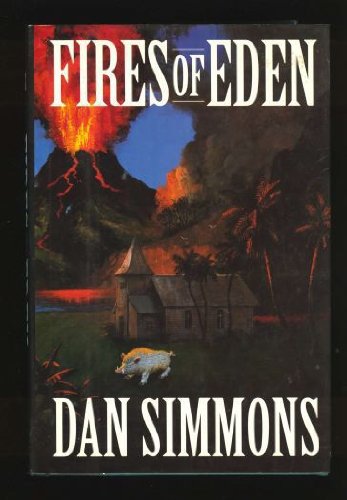 A real-estate mogul's attempts to build a deluxe Hawaiian resort are undermined by the disappearance of guests, discovery of strange beasts capable of human speech, and volcanic eruptions, as vengeful gods bring their immortal rivalries into the modern world.

A period romance masquerading as a metaphysical thriller disguised as a buddy movie, this latest novel from Simmons (Lovedeath, 1993, etc.) bridges two centuries and offers lots of plucky fun along the way. The smoldering garden of the title is Hawaii, where the golf- starved Japanese who have come to purchase billionaire Byron Trumbo's sprawling resort are as likely to discover severed hands on the 14th green as they are to encounter a giant talking pig that devours souls. Historian Eleanor Perry has a different motive for her visit--to solve the mystery of her Great Great Great Great Aunt Kidder, whose Hawaiian adventures with Mark Twain in 1866 will be paralleled by Perry's own. In each era, a grumpy cabal of local priests summons the forces of darkness to rid the islands of an unwanted white plague--missionaries in Aunt Kidder's day, real- estate tycoons in Perry's. Shifting deftly between the mid-1800s and the present, Simmons uses Aunt Kidder's journal to recount her unlikely romantic gambol with Samuel Clemens, not yet Mark Twain but acid-tongued nonetheless. The pair's climactic scene together, in which Kidder and Clemens slather themselves with rotten kukui- nut oil and descend naked into the underworld, approaches inspired hilarity without compromising suspense. Never really too cloying in its symmetries, the novel supplies Perry with her own confederates, who, while not possessed of Clemens's legendary wit, are substantially more than cardboard action figures. In a useful twist, it's Cordie Stumpf, Perry's hard-drinking sister in arms, who, with a reluctant Trumbo as her Twain, battles the novel's pig- god Mephistopheles to reclaim Perry's captured ghost and save the imperiled resort. Allying the women, literally, with female volcanic deities, Simmons even wedges a feminist angle into his already bulging anthropological primer. The flip side of a Don Ho single, short on poi and ukuleles but long on elemental carnage, vengeful immortals, and nimble plotting. -- Copyright ©1994, Kirkus Associates, LP. All rights reserved.