Items related to ON THE FIRING LINE: The Public Life of Our Public Figures 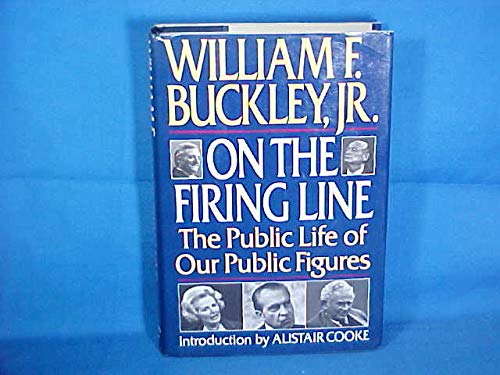 ON THE FIRING LINE: The Public Life of Our Public Figures

Title: ON THE FIRING LINE: The Public Life of Our ...

Firing Line , Buckley's TV interview program, has been around since 1966, and his guests, whose feisty talks are included in this scrapbook, have included Henry Kissinger, Michael Harrington, Roy Cohn, Yehudi Menuhin, Alan Paton, Steve Allen, Truman Capote, Jimmy Hoffa, Norman Mailer, Muhammad Ali, Timothy Leary, Al Capp, Jeremy Rifkin and Margaret Thatcher, to list a few. Quoting such folk should make for some intellectual and cultural fireworks, but the main problem with this hefty compendium is Buckley himself. Wrapping the edited snippets of conversations into his running commentary, he retrospectively uses his guests as a sounding-board to present his opinions on politics, the communist threat, capital punishment, crime, the 1960s ("The Kid Years") and religion. James Baldwin, George McGovern, Jesse Jackson and William Kunstler all get their comeuppance. Readers receptive to Buckley's conservative perspective may glide through his shooting-gallery; others will wish there had been less editorializing and more excerpts from the televised verbal combat.
Copyright 1989 Reed Business Information, Inc.