Items related to THE FLAMETHROWERS9 A Novel 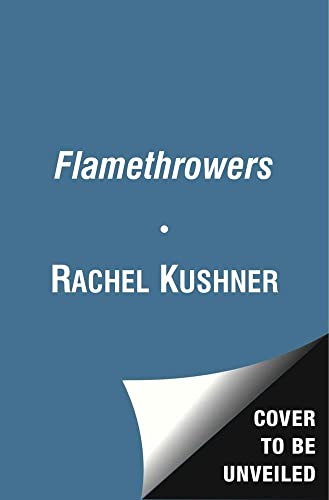 THE FLAMETHROWERS9 A Novel

Signed by author on title page in black fountain ink. Both of author's novels to date, TELEX FROM CUBA and THE FLAMETHROWERS, are highly-regarded , and both of them were shortlisted for the National Book Award in Fiction. Kushner is also the author of a book of linked short stories, THE STRANGE CASE OF RACHEL K. Mint, unread, first edition, first printing copy opened only for signing, in as new, mylar-protected dust jacket. L140. Bookseller Inventory # 022153

Title: THE FLAMETHROWERS9 A Novel

Rachel Kushner’s The Flamethrowers, a finalist for the National Book Award, was just named a Top Ten Book of 2013 by the New York Times Book Review and one of Time magazine’s top ten fiction books. Kushner’s first novel, Telex from Cuba, was also a finalist for a National Book Award and was reviewed on the cover of The New York Times Book Review. The Flamethrowers, even more ambitious and brilliant, is the riveting story of a young artist and the worlds she encounters in New York and Rome in the mid-1970s—by turns underground, elite, and dangerous.

The year is 1975 and Reno—so-called because of the place of her birth—has come to New York intent on turning her fascination with motorcycles and speed into art. Her arrival coincides with an explosion of activity in the art world—artists have colonized a deserted and industrial SoHo, are staging actions in the East Village, and are blurring the line between life and art. Reno meets a group of dreamers and raconteurs who submit her to a sentimental education of sorts. Ardent, vulnerable, and bold, she begins an affair with an artist named Sandro Valera, the semi-estranged scion of an Italian tire and motorcycle empire. When they visit Sandro’s family home in Italy, Reno falls in with members of the radical movement that overtook Italy in the seventies. Betrayal sends her reeling into a clandestine undertow.

The Flamethrowers is an intensely engaging exploration of the mystique of the feminine, the fake, the terrorist. At its center is Kushner’s brilliantly realized protagonist, a young woman on the verge. Thrilling and fearless, this is a major American novel from a writer of spectacular talent and imagination.

Every so often, you’ll come across a book that burns so hot and bright it’ll sear a shadow on your vision. For a while afterwards, everything you look at will have the book’s imprint on it; your world will be colored in the book’s tones, and you will glimpse the book’s characters on the street and feel your heart knocking in your chest for a few blocks, as if you’d escaped a close call.

This is how I felt after I read Rachel Kushner’s brilliant The Flamethrowers. The night I finished it, I dreamt of racing motorcycles across sun-shot salt-flats and of floating in glimmering Italian swimming pools. In the morning, I tried to describe the book to a friend but I eventually faltered into silence.

This is a beautiful book, I finally said, a book full of truth, a book about art and motorcycle racing and radicalism, about innocence and speed and stepping up to a dangerous brink, a book very deeply about the late seventies in New York City and its powerful blend of grittiness and philosophical purity.

Oh, said my friend. So. What is it about?

I tried again. I said: It’s a love story, about a young artist under the sway of an older, established artist, scion of a motorcycle family, who betrays her, and she joins up with an underground group in Italy. It feels like a contemporary European novel, philosophical and intelligent, with an American heart and narrative drive, I said.

Just read the book, I said and my friend did, and loved it to speechlessness, as well. Wow, is all he could say when he returned the book to me.

I don’t blame him. The truth is, this is a strange and mysterious novel, a subtle novel. Much of its power comes from the precision of Kushner’s language and how carefully she allows the flashes of perception to drive the narrative forward. See Reno, the offbeat narrator, describing ski racing to her lover, Sandro, saying, “Ski racing was drawing in time.” Suddenly you can see what she means, a body’s crisp slaloming down the white slope, the way the skier draws a perfect serpent down the clock.

Or see Reno, racing her motorcycle: “Far ahead of me, the salt flats and mountains conspired into one puddled vortex. I began to feel the size of this place. Or perhaps I did not feel it, but the cycle, whose tires marked its size with each turn, did. I felt a tenderness for them, speeding along under me.” There is something deeply eerie happening under the words, something on the verge of tipping over and spilling out; and, at the same time, a gentleness and innocence at the core of all that noise and speed.

Rachel Kushner is an unbelievably exciting writer, a writer of urgent and beautiful sentences and novels that are vast in their ambition and achievement. I finished it months ago, but The Flamethrowers—startling, radiant—still haunts me.