Items related to FLESH AND MACHINES: How Robots Will Change Us

Home BROOKS, Rodney A. FLESH AND MACHINES: How Robots Will Change Us
Stock Image 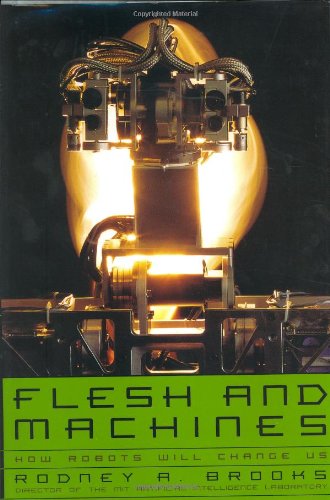 FLESH AND MACHINES: How Robots Will Change Us

Title: FLESH AND MACHINES: How Robots Will Change Us

Flesh and Machines explores the startlingly reciprocal connection between humans and their technological brethren, and explains how this relationship is being redefined as humans develop increasingly complex machines. The impetus to build machines that exhibit lifelike behaviors stretches back centuries, but for the last fifteen years much of this work has been done in Rodney Brooks’s laboratory at MIT. His goal is not simply to build machines that are like humans but to alter our perception of the potential capabilities of robots. Our current attitude toward intelligent robots, he asserts, is simply a reflection of our own view of ourselves.

In Flesh and Machines, Brooks challenges that view by suggesting that human nature can be seen to possess the essential characteristics of a machine. Our instinctive rejection of that idea, he believes, is itself a conditioned response: we have programmed ourselves to believe in our “tribal specialness” as proof of our uniqueness.

Provocative, persuasive, compelling, and unprecedented, Flesh and Machines presents a vision of our future and our future selves.

The world of HAL and Data, of sentient machines, is fast approaching. Indeed, in some ways it has already arrived, as humans incorporate bionic technology and as humanlike machines increasingly take on the work of humans.

Rodney Brooks, a professor of engineering at MIT, has been involved in this transformation for decades. He has helped design robots that reason, at least after a fashion. The machines are as yet primitive, but, Brooks writes, in five years the boundary between what is now fantasy and fact will be breached, and intelligent machines will come into their own. With them will come a host of ethical problems, as we wrestle with the implications of Asimov's laws of robotics and with the very real possibility that we have created a new kind of slave. There's no way of getting around this future, it would seem, and, adds Brooks, our species will change in the bargain: "With all these trends we will become a merger between flesh and machines."

Antitechnologists may shudder at the story line, but readers interested in the gee-whiz possibilities of the digital age will be fascinated by Brooks's vision of what is and what will be. --Gregory McNamee


Please e-mail or call to reserve. Shipping & Handling rates as follows:
Domestic U.S.A. Mimimum $4.50 for up to 2lbs.; $5.50 for up to 5lbs: For non-domestic shipment, or over 5 lbs., and shipment other than USPS media rate, will quote. Will accept checks, money orders and purchase through ABE's credit card program. Vermont residents please add 6% sales tax. We will accept returns, if the book is not as stated, within 30 days of receipt of item.
UPDATE DETAILS; Falls Bookstore, P.O. Box 233; Rea...


Shipping per conditions as listed. If other desired please contact.