Items related to FLY-FISHING FOR SHARKS 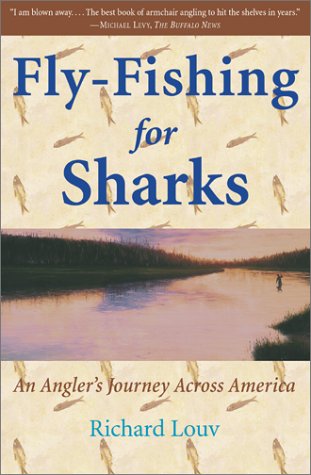 For three years, Richard Louv listened to America by going fishing. To explore the cultures of angling, he traveled from the Atlantic to the Pacific and to the Gulf Coast, too; from bass waters north and south to fly-fishing waters east and west. He joined a professional bass tournament on Lake Erie and got a casting lesson from fly-fishing legend Joan Wulff in Colorado. He angled with corporate executives in Montana and stoic steelheaders in the Northwest. He went ice fishing on Michigan's Upper Peninsula and fly-fishing for sharks in California. In the Midwest, he fished with the host of the nation's longest-running television fishing program. He spent time with the captains of Florida, the poachers of the West, and the regulars who fish the Harlem and Hudson Rivers in New York City. Fly-Fishing for Sharks is the delightful result of Richard Louv's journey, a portrait of America on the water, fishing rod in hand. From Whitefish Willy to Bass'n Gal's Sugar Ferris, the people Louv writes about are simply unforgettable. As diverse as the cultures of fishing are. Richard Louv found that certain values unite them. Most of the anglers he spoke with care passionately about the health of the country's water; some have pondered what fishing tells us about our changing relationship with nature. Every one of them finds something renewing, even healing, in angling -- and many of these men and women believe that fishing can be a thread that binds the generations. Louv discovers from a Hemingway son what it really was like to go fishing with Papa; he fishes and talks about fatherhood with Robert Kennedy, Jr.; and he shares the joys and pains of caring for his own children. Fly-Fishing for Sharks is by turns funny, thoughtful, and poignant -- a revealing look at our country from an unusual perspective.

"When you're fly-fishing for sharks," observes Richard Louv from an 18-foot aluminum boat 12 miles off the coast of San Diego doing just that, "the line between lunacy and sanity is pretty thin." The truth is, most anglers, whatever they're fishing for, live fairly close to that line, and it's that proximity that leads Louv on a provocative quest. "The waters we fish, and how we fish, reflect larger political, ethical, even spiritual issues," he writes. "How shall we reconnect to nature? How should we treat fellow creatures of other species? How do we hold fast to what is old, timeless, and slow?"

As he travels from the Pacific to the Atlantic and the Gulf Coast to the frozen lakes of Northern Michigan, Louv ponders the ways and whys of pretty much the whole teeming democracy of rods and reelers--fly-fishers, ice-fishers, big-game fishers, guides, tournament bassers, even poachers--and their impact on American culture and the environment. He heads out into streams, lakes, and oceans with them, attends expos with them, buys bait with them, and sits down in coffee shops with them to better understand who they are, what lures them, what they take from the waters, and what they give back. He meets a marvelous group of players, among them the sons of Ernest Hemingway and R.F.K.; fly-fishing's incomparable first lady, Joan Wulff; and the less well-pedigreed, too, like a Texas woman who poignantly describes how bass fishing saved her life after she was diagnosed with terminal cancer and her church shunned her because she was a lesbian. He explores how fishing has traditionally tied together generations--including those of his own family--and even how finding a long-forgotten strain of trout in Southern California could halt future development in its tracks. Louv might easily have gotten skunked on such an ambitious fishing trip; instead, his journey reveals much about America and its love of angling. --Jeff Silverman