Items related to THE FORBES BOOK OF BUSINESS QUOTATIONS 14173 Thoughts... 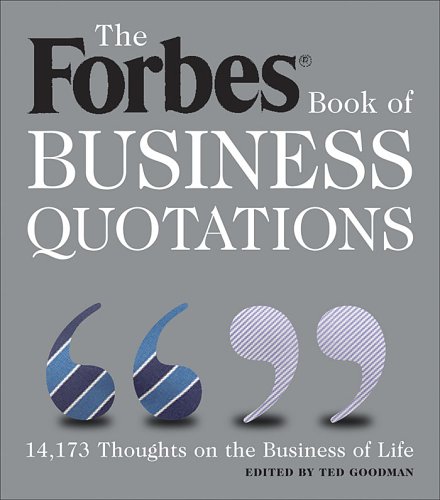 Quantity Available: 1
View all  copies of this book
Buy Used
Price: US$ 17.81 Convert Currency
Shipping: US$ 34.00 From Australia to U.S.A. Destination, rates & speeds
Add to basket

Now including thousands of new quotations, this bestselling compilation of business wit and wisdom is the ultimate desk reference for speakers, writers, CEOs, managers, and employees alike.

This handsome collection, featuring nearly 2,000 new quotations, new topics, and a fresh new look, is a trove of enlightening and useful witticisms about the world of business, drawn from across the centuries and all corners of the globe. It features a wide range of germane wisdom from such contemporary luminaries as Katherine Graham, Susan Sontag, Bill Gates, Ronald Reagan, Fran Lebowitz, Gore Vidal, and Donald Trump alongside timeless quotes from Ovid, Ralph Waldo Emerson, Gertrude Stein, Mahatma Gandhi, Henry Ford, Helen Keller, John D. Rockefeller, Oscar Wilde, J.R.R. Tolkien, Virginia Woolf, George Bernard Shaw, and thousands of others—not to mention hundreds of quotes from the Forbes men themselves. Fully indexed for easy use as a speaker’s or writer’s reference, this inspiring volume comes straight from the most trusted and widely read business magazine of all time.

Now revised and updated with thousands of new quotations, this best-selling compilation of business wit and wisdom is the ultimate desk reference for speakers, writers, CEOs, managers, and employees alike. Filled with inspiring wisdom from our greatest luminaries of every age, this desktop guide covers an astonishing range of subjects—from ability and attitude to youth and zeal. Among the men and women featured are:

Small store set up as a Bindery where we specialise in the restoration of old books, with an area set aside for the display & sale of books.


Tel. 0400235251 or (03)55623008.
Every attempt is made to describe books as accurately as
possible. Any book found to be not as described can be returned with in seven
days, please advise us of your intent to return as soon as possible. We accept
Visa, Mastercard, direct deposit & paypal. Bank drafts made out to Australian
Dollars. Postage costs charged to buyer.
PLEASE NOTE THAT THE SHIPPING QUOTED BY ABE MAY VARY FROM THE ACTUAL SHIPPING
COST. For a firm quote on International shipping costs p...


Tel. 0400235251 or (03)55623008. Australian buyers note that where possible the cost of books posted are based on,up to 500grams @$8.00, and up to 3 kg @ $13.00, and any thing above 3 kg at cost.
International Shipping: PLEASE NOTE THAT THE SHIPPING QUOTED BY ABE MAY VARY FROM THE ACTUAL SHIPPING COST. For a firm quote on International shipping costs please email us. Insurance at buyers request only - additional costs apply.