Items related to THE FRANKENFOOD MYTH How Protest and Politics Threaten...

Home Miller, Henry I with Gregory Conko THE FRANKENFOOD MYTH How Protest and Politics Threaten the ...
Stock Image 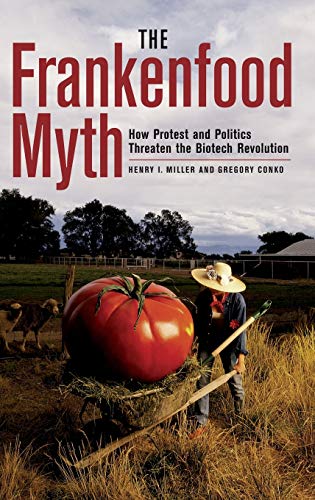 THE FRANKENFOOD MYTH How Protest and Politics Threaten the Biotech Revolution

Miller, Henry I with Gregory Conko

AbeBooks Seller Since May 23, 2003 Seller Rating

This is a hardcover second edition book in very good plus condition, but missing a dust jacket. The end papers and interior pages are in fine condition - crisp, clean, unmarked. The cover is a black cloth with a silver metallic title on the spine. There is a light touch of wear at the tips of the spine. Nice reading copy. ; 8vo; 269 pages. Bookseller Inventory # 7175

Title: THE FRANKENFOOD MYTH How Protest and ...

Few topics have inspired as much international furor and misinformation as the development and distribution of genetically altered foods. For thousands of years, farmers have bred crops for their resistance to disease, productivity, and nutritional value; and over the past century, scientists have used increasingly more sophisticated methods for modifying them at the genetic level. But only since the 1970s have advances in biotechnology (or gene-splicing to be more precise) upped the ante, with the promise of dramatically improved agricultural products―and public resistance far out of synch with the potential risks.

In this provocative and meticulously researched book, Henry Miller and Gregory Conko trace the origins of gene-splicing, its applications, and the backlash from consumer groups and government agencies against so-called Frankenfoods―from America to Zimbabwe. They explain how a happy conspiracy of anti-technology activism, bureaucratic over-reach, and business lobbying has resulted in a regulatory framework in which there is an inverse relationship between the degree of product risk and degree of regulatory scrutiny. The net result, they argue, is a combination of public confusion, political manipulation, ill-conceived regulation (from such agencies as the USDA, EPA, and FDA), and ultimately, the obstruction of one of the safest and most promising technologies ever developed―with profoundly negative consequences for the environment and starving people around the world. The authors go on to suggest a way to emerge from this morass, proposing a variety of business and policy reforms that can unlock the potential of this cutting-edge science, while ensuring appropriate safeguards and moving environmentally friendly products into the hands of farmers and consumers. This book is guaranteed to fuel the ongoing debate over the future of biotech and its cultural, economic, and political implications.

Describes how misguided activism and government policies are squandering potential advances in biotechnology.

Books, Maps, Prints, and More is an internet store for collectible, interesting, useful, and unusual books. Our books are mostly out-of-print and formerly owned. Some look new, others have some wear. When a book offered shows wear, we will attempt to describe the wear in some detail so that you may make your book buying decision with confidence. We welcome questions in advance of the purchase and can provide images if we have a window of time to take the image (if it doesn't already exist). We also operate a walk-in store at 4157 Grand Ave So in Minneapolis, MN, 55409. http://www.booksmaps.com

We strive to: identify the edition and year of publication, describe the condition carefully, package structurally for safe passage, and ship on time. >>>>>

Postage costs shown with the book/item price are general. Size, shape, weight, and value determine the postage for shipments from the U.S. Sometimes they have to be adjusted. Domestic: Pos...


Orders usually ship within 2 business days. We often ship the same day. Shipping costs are based on books weighing 2.2 LB, or 1 KG. If your book order is heavy or oversized, we may contact you to let you know extra shipping is required.