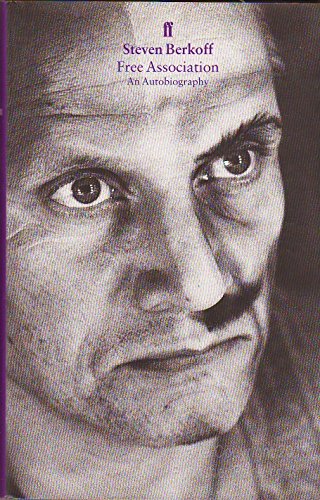 Quantity Available: 1
View all  copies of this book
Buy Used
Price: US$ 12.27 Convert Currency
Shipping: US$ 25.00 From Australia to U.S.A. Destination, rates & speeds
Add to basket

Hardcover, 24cms x 16cms (9˝" x 6Ľ"), with dust jacket Steven Berkoff is a gifted playwright, a charasmatic stage performer, an inventive director and a screen actor. He has become one of the foremost innovators in British theatre since bursting on the scene with 'Metamorphosis' in 1969. This book is essential reading for all those fascinated by the explosive dynamism that is Steven Berkoff, and an inspiration to those entering the theatrical profession. GOOD book in GOOD unclipped dust jacket 410 pages. Bookseller Inventory # 43747

Steven Berkoff has been variously described as exciting, controversial, thrilling, egocentric, electric, dynamic and difficult. A gifted playwright, a charismatic stage performer, an inventive director and a screen actor - who is Steven Berkoff? Of Russian extraction, born in the East End and schooled in Hackney, he has become one of the foremost innovators in British theatre since bursting upon the scene with Metamorphosis in 1969.
A childhood spent ranging freely between London and New York, teenage years spent going 'up West', working as a waiter on a cruise ship, an unhappy stint as a salesman in London, Iceland and Germany (gambling at the same tables in Wiesbaden as Dostoievsky), then on to drama school, a course of mime with Jaques Le Coq in Paris and early days in weekly rep in the early sixties, this first collection of autobiographical writings from Steven Berkoff shows how he eschewed the establishment and broke new ground, how he utilised his life experiences theatrically and developed his radical use of the English language for his plays East, West and Greek, and his adaptations of Kafka and Edgar Allan Poe.

Steven Berkoff was born in Stepney, East London and started acting at the City Literary Institute when he was 19. Following more training at the Webber Douglas School of Drama, he worked extensively in repertory theatre in England and Scotland - doing every job from understudy to stage management. In 1968 he formed his own company, the London Theatre Group. Through mime, gymnastics and voice, the Group liberated themselves from the conventions of mainstream theatre and started to evolve an innovative, more integrated theatrical language. Berkoff's encounter with the mime artist Jacque le Coq in Paris was seminal in this. Steven Berkoff's plays include East, West, Sink the Belgrano!, Decadence, Kvetch, Acapulco, Ritual in Blood, Oedipus, Messiah: Scenes from a Crucifixtion, The Secret Love Life of Ophelia, West, Decadence, Sit and Shiver, Greek, Harry's Christmas, Lunch, Acapulco, Sink the Belgrano!, Massage, Sturm und Drang and Brighton Beach Scumbags. He has written an autobiography, Free Association, and the theatre books I Am Hamlet, Overview and Meditations on Metamorphosis. Among Berkoff's film credits are Octopussy, Beverly Hills Cop and his own production of Decadence.


We accept Mastercard, Visa and American Express. We also accept Paypal. Note: In Australia only, we also accept postal orders, Bankcard, and cheques by arrangement). Cost of books received in condition not as described will be fully refunded (excluding postage) if returned within 7 days of receipt.