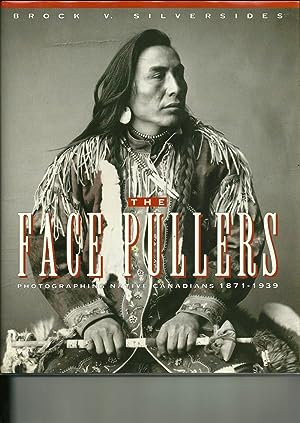 AbeBooks Seller Since May 29, 2012 Seller Rating

Quantity Available: 1
View all  copies of this book
Buy New
Price: US$ 37.07 Convert Currency
Shipping: US$ 10.70 From Canada to U.S.A. Destination, rates & speeds
Add to basket

The Face Pullers: Photographing Native Canadians 1871 - 1939 is a collection of almost 200 archival photographs of Prairie First Nations individuals and families compiled by the Chief Audio-Visual Archivist at the Provincial Archives of Alberta, Brock Silversides. The collection provides an overview of the overwhelming changes that occurred in the lives of First Nations communities in Saskatchewan and Alberta. The images are organized according to broad time periods where the author identifies the photographers and their role in photographing the First Nations. Bookseller Inventory # 001009

The Face Pullers documents a particularly rich period in the history of Canadian photography. These photographs of First nations people - spanning the period 1871 to 1939 - provide not only a fascinating glimpse of a vanished world, but also illuminate the ways in which myths and misunderstandings about Native people have influenced, from the earliest days, the images produced by non-Native photographers.

In the late nineteenth and early twentieth century, many Canadian photographers - both amateur and professional - took pictures of Native people for documentary and commercial purposes. The Indians initially regarded photographic equipment with curiosity, suspicion, and fear, and upon viewing the final product, labeled the camera "the face puller." The photographs were in great demand among the white population, and while they often presented idealized views of First Nations people, they nevertheless managed to portray some authentic aspects of the Native experience. The evocative images in this collection provide a perspective of these individuals and their lives impossible to convey with mere words, and bear witness to the strength and resilience of what many believed at the time to be a dying race.

The Face Pullers provides an unusual record of the myth-making surrounding Native people, and valuable insights into the history of Indian/white relations in Canada.

As the Chief Audio-Visual Archivist at the Provincial Archives of Alberta, Brock Silversides works to acquire and preserve audio-visual documents of historical significance and to make them available to the public.

ENGLISH:
SHIPPING CHARGES AT CHECKOUT ARE FOR INDICATIVE PURPOSES ONLY and are based on an average for a book weighing 2.2 LB or 1 KG. The postal charges that will be added will correspond to the actual postal charges applicable according to the weight of the book (s). If a package weighs more than a kilo, you will be notified of an increase in the base price. Conversely, a small package, depending on the destination, could benefit from a reduction in shipping costs and expedited shipping. Value books will be shipped with a tracking number and insurance.
All transportation costs are the responsibility of the customer.