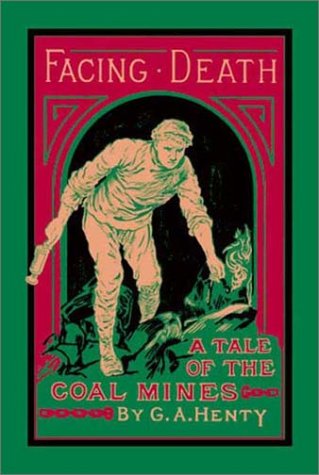 "Facing Death" is a story with a purpose. It is intended to show that a lad who makes up his mind firmly and resolutely that he will rise in life, and who is prepared to face toil and ridicule and hardship to carry out his determination, is sure to succeed. The hero of the story is a typical British boy, dogged, earnest, generous, and though "shame-faced" to a degree, is ready to face death in the discharge of duty.

About the Author: G. A. Henty's life was filled with exciting adventure. After completing his work at Westminster School, he attended Cambridge University, where he undertook a rigorous course of study and also enjoyed boxing, wrestling, and rowing. The strenuous study and healthy, competitive participation in sports prepared Henty for his adventures. To name just a few, he fought with the British army in the Crimea, served as a war correspondent during Garibaldi's fight for independence in Italy, visited Abyssinia, witnessed the Franco-Prussian war while in Paris, observed the Carlists in Spain, attended the opening of the Suez Canal, toured India with the Prince of Wales (later Edward II), and visited the California gold fields.

G. A. Henty lived during the reign of Queen Victoria (1837-1901) and began his story-telling career with his own children. After dinner it was his custom to spend an hour or two telling them a story that often continued for days. In fact, some stories lasted for weeks! One evening a friend happened to be present during Henty's "story hour." Watching the children as they sat spell-bound, he urged Henty to write down his stories so others could enjoy them. Happily for us, Henty did so. One of his secretaries reported that he often would pace rapidly back and forth in his study dictating stories as fast as the secretary could record them. He became known to his readers as "The Prince of Story-Tellers" and "The Boys Own Historian." Henty's stories revolve around a fictional boy hero during fascinating periods of history. His heroes are diligent, courageous, intelligent, and dedicated to their country and cause in the face of, at times, great peril. Respected historians have acknowledged his histories, particularly the accounts of battles, for their accuracy. His ability to bring his readers action-packed adventure in an accurate historical setting makes the study of history exciting, and removes the drudgery often associated with such study.

Book Description Robinson Books, 2002. Condition: Good. A+ Customer service! Satisfaction Guaranteed! Book is in Used-Good condition. Pages and cover are clean and intact. Used items may not include supplementary materials such as CDs or access codes. May show signs of minor shelf wear and contain limited notes and highlighting. Seller Inventory # 1590870557-2-4