Items related to The Faith of Graffiti 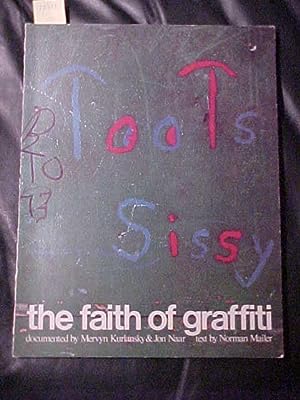 The Faith of Graffiti

Title: The Faith of Graffiti

"The Faith is the bible of graffiti. It forever captures the place, the time, and the writings of those of us who made it happen." —Snake I

In 1973, author Norman Mailer teamed with photographer Jon Naar to produce The Faith of Graffiti, a fearless exploration of the birth of the street art movement in New York City. The book coupled Mailer's essay on the origins and importance of graffiti in modern urban culture with Naar's radiant, arresting photographs of the young graffiti writers' work. The result was a powerful, impressionistic account of artistic ferment on the streets of a troubled and changing city—and an iconic documentary record of a critical body of work now largely lost to history.

This new edition of The Faith of Graffiti, the first in more than three decades, brings this vibrant work—the seminal document on the origins of street art—to contemporary readers. Photographer Jon Naar has enhanced the original with thirty-two pages of additional photographs that are new to this edition, along with an afterword in which he reflects on the project and the meaning it has taken on in the intervening decades. It stands now, as it did then, as a rich survey of a group of outsider artists and the body of work they created—and a provocative defense of a generation that questioned the bounds of authority over aesthetics.

Norman Mailer (1923-2007) was one of the most important American voices of the twentieth century—a journalist, essayist, novelist, poet, playwright, screenwriter, film director, and public intellectual. The author of more than forty books including The Naked and the Dead, The Executioner's Song, and Armies of the Night, he was twice awarded the Pulitzer Prize, received the National Book Award, and was a member of the American Academy of Arts and Letters.

Jon Naar is an internationally acclaimed documentary and fine art photographer and the author of twelve books, including The Birth of Graffiti and the bestselling Design for a Limited Planet. His photography has been exhibited at the Metropolitan Museum, the Museum of Modern Art, New York, the Centre Pompidou, Paris, and many other museums and art galleries worldwide. He lives in New Jersey.