Items related to Except By Falling 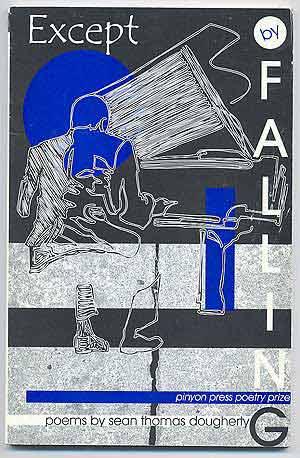 First edition, a paperback original. Fine copy. Inscribed by Dougherty to a fellow poet: "12-13-2000, For - -- Who's poems of Philadelphia rivers, pigeons, trumpet players, + sneakers slung over a line helped to create everything I write - for a good man a great poet - yr pal Sean Thomas". Winner of the 2000 Pinyon Press Poetry Prize. Seller Inventory # 95210

Title: Except By Falling

Winner of the 2000 Pinyon Press Poetry Prize, Sean Thomas Dougherty's collection EXCEPT BY FALLING articulates the struggles of working-people in the predominantly blue collar neighborhoods of his youth, and the Syracuse, NY neighborhood where he currently lives. His poems capture the corners, schoolyards, playgrounds, bodegas, the kid who bounces a basketball from "there to where," men and women who work in factories, and Haitian teenagers harassed by cops.

Yet also within this book, there is a litany of cultural and political references: Eurydice and the Argentine Amnesty, Eric Dolphy and Pablo Neruda, Miles Davis and Marc Chagall, the Zootsuit riots and the assassination of Martin Luther King, Jr.--as well as Dougherty's articulation of the struggles against racism that his own interracial upbringing calls him to engage.

Most of the poems are written in a variety of traditional "closed" forms designed to reflect the reality of economic and social barriers that impede the lives of working people--as if these barriers can be resisted by their appropriation, how they can be changed into a form of singing, a form of song.

Sean Thomas Dougherty grew up in an interracial politically radical family, with an African-American step-father and a mother of Moldavian-Jew/Okie descent. He is a former high school drop-out who has worked in factories, a sawmill, warehouses, and as a teacher. He received his MFA at Syracuse University where he was awarded the Delmore Schwartz Poetry Prize, and where he is currently completing a PHD in Composition and Cultural Rhetoric. He also teaches as a Poet-in-the-Schools across the East Coast. He is the author of two books of poems: LOVE SONG OF THE YOUNG COUPLE, THE DUMB JOB (1995 Red Dancefloor) and THE MERCY OF SLEEP (1995 Basfal), and a critically praised mixed genre book THE BODY'S PRECARIOUS BALANCE (1997 Red Dancefloor). His work has appeared in numerous magazines, anthologies, and textbooks. He lives with his son Gabriel in Syracuse, New York.


Orders usually ship within 2 business days. Our $10 rate is for UPS or Priority Mail. Our $4.50 rate is media mail which can take a week or two, or a month or two (rarely, but has happened). We email tracking information for all domestic shipments. Shipping costs are based on books weighing 2.2 LB, or 1 KG. If your book order is heavy or oversized, we may contact you to let you know extra shipping is required.