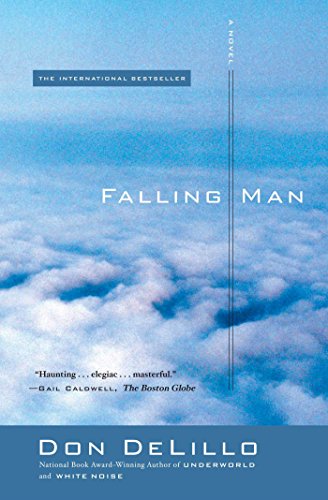 Synopsis: There is September 11 and then there are the days after, and finally the years.

Falling Man is a magnificent, essential novel about the event that defines turn-of-the-century America. It begins in the smoke and ash of the burning towers and tracks the aftermath of this global tremor in the intimate lives of a few people.

First there is Keith, walking out of the rubble into a life that he'd always imagined belonged to everyone but him. Then Lianne, his es-tranged wife, memory-haunted, trying to reconcile two versions of the same shadowy man. And their small son Justin, standing at the window, scanning the sky for more planes.

These are lives choreographed by loss, grief and the enormous force of history.

Brave and brilliant, Falling Man traces the way the events of September 11 have reconfigured our emotional landscape, our memory and our perception of the world. It is cathartic, beautiful, heartbreaking.

Review: The defining moment of turn-of-the-21st-century America is perfectly portrayed in National Book Award winner Don DeLillo's Falling Man. The book takes its title from the electrifying photograph of the man who jumped or fell from the North Tower on 9/11. It also refers to a performance artist who recreates the picture. The artist straps himself into a harness and in high visibility areas jumps from an elevated structure, such as a railway overpass or a balcony, startling passersby as he hangs in the horrifying pose of the falling man.

Keith Neudecker, a lawyer and survivor of the attack, arrives on his estranged wife Lianne's doorstep, covered with soot and blood, carrying someone else's briefcase. In the days and weeks that follow, moments of connection alternate with complete withdrawl from his wife and young son, Justin. He begins a desultory affair with the owner of the briefcase based only on their shared experience of surviving: "the timeless drift of the long spiral down." Justin uses his binoculars to scan the skies with his friends, looking for "Bill Lawton" (a misunderstood version of bin Laden) and more killing planes. Lianne suddenly sees Islam everywhere: in a postcard from a friend, in a neighbor's music--and is frightened and angered by its ubiquity. She is riveted by the Falling Man. Her mother Nina's response is to break up with her long-time German lover over his ancient politics. In short, the old ways and days are gone forever; a new reality has taken over everyone's consciousness. This new way is being tried on, and it doesn't fit. Keith and Lianne weave into reconciliation. Keith becomes a professional poker player and, when questioned by Lianne about the future of this enterprise, he thinks: "There was one final thing, too self-evident to need saying. She wanted to be safe in the world and he did not."

DeLillo also tells the story of Hammad, one of the young men in flight training on the Gulf Coast, who says: "We are willing to die, they are not. This is our srength, to love death, to feel the claim of armed martyrdom." He also asks: "But does a man have to kill himself in order to accomplish something in the world?" His answer is that he is one of the hijackers on the plane that strikes the North Tower.

At the end of the book, De Lillo takes the reader into the Tower as the plane strikes the building. Through all the terror, fire and smoke, De Lillo's voice is steady as a metronome, recounting exactly what happens to Keith as he sees friends and co-workers maimed and dead, navigates the stairs and, ultimately, is saved. Though several post-9/11 novels have been written, not one of them is as compellingly true, faultlessly conceived, and beautifully written as Don De Lillo's Falling Man. --Valerie Ryan

Book Description Scribner Book Company, 2008. Mass Market Paperback. Condition: Used; Good. Dispatched, from the UK, within 48 hours of ordering. This book is in good condition but will show signs of previous ownership. Please expect some creasing to the spine and/or minor damage to the cover. Damaged cover. The cover of is slightly damaged for instance a torn or bent corner. Aged book. Tanned pages and age spots, however, this will not interfere with reading. Seller Inventory # CHL5541165

Book Description Scribner. Mass Market Paperback. Condition: Good. A copy that has been read, but remains in clean condition. All pages are intact, and the cover is intact. The spine may show signs of wear. Pages can include limited notes and highlighting, and the copy can include previous owner inscriptions. At ThriftBooks, our motto is: Read More, Spend Less. Seller Inventory # G141656229XI3N00

Book Description Scribner. Mass Market Paperback. Condition: Good. A copy that has been read, but remains in clean condition. All pages are intact, and the cover is intact. The spine may show signs of wear. Pages can include limited notes and highlighting, and the copy can include previous owner inscriptions. At ThriftBooks, our motto is: Read More, Spend Less. Seller Inventory # G141656229XI3N00

Book Description Scribner Book Company. Mass Market Paperback. Condition: GOOD. Spine creases, wear to binding and pages from reading. May contain limited notes, underlining or highlighting that does affect the text. Possible ex library copy, thatâ ll have the markings and stickers associated from the library. Accessories such as CD, codes, toys, may not be included. Seller Inventory # 3158446322

Book Description Paperback. Condition: Very Good. The book has been read, but is in excellent condition. Pages are intact and not marred by notes or highlighting. The spine remains undamaged. Seller Inventory # GOR002604600

Book Description Paperback. Condition: Fair. A readable copy of the book which may include some defects such as highlighting and notes. Cover and pages may be creased and show discolouration. Seller Inventory # GOR010270945