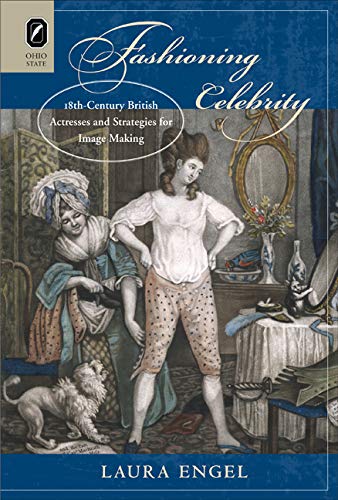 Synopsis: This volume takes a new approach to the study of late eighteenth-century British actresses by examining the significance of leading actresses’ autobiographical memoirs, portraits, and theatrical roles together as significant strategies for shaping their careers.  In an era when acting was considered a suspicious profession for women, eighteenth-century actresses were “celebrities” in a society obsessed with fashion, gossip, and intrigue. Fashioning Celebrity: Eighteenth-Century British Actresses and Strategies for Image Making, by Laura Engel, considers the lives and careers of four actresses: Sarah Siddons, Mary Robinson, Mary Wells, and Fanny Kemble. Using conventions of the era’s portraiture, fashion, literature, and the theater in order to create their personas on and off stage, these actresses provided a series of techniques for fashioning celebrity that still survive today.  By emphasizing the importance of reading narratives through visual and theatrical frameworks and visual and theatrical representations through narrative models, Engel demonstrates the ways in which actresses’ identities were imagined through a variety of discourses that worked dialectically to construct their complex self-representations.  Fashioning Celebrity suggests that eighteenth-century practices of self-promotion mirror contemporary ideas about marketing, framing, and selling the elusive self, providing a way to begin to chart a history of our contemporary obsession with fame and our preoccupation with the rise and fall of famous women.

Laura Engel is associate professor of English at Duquesne University.

Book Description Ohio State University Press, 2011. Hardcover. Condition: Good. Item may show signs of shelf wear. Pages may include limited notes and highlighting. May include supplemental or companion materials if applicable. Access codes may or may not work. Connecting readers since 1972. Customer service is our top priority. Seller Inventory # mon0001671631

Book Description Ohio State University Press, 2011. Condition: Good. A+ Customer service! Satisfaction Guaranteed! Book is in Used-Good condition. Pages and cover are clean and intact. Used items may not include supplementary materials such as CDs or access codes. May show signs of minor shelf wear and contain limited notes and highlighting. Seller Inventory # 0814211488-2-4