Items related to Fast Food Nation: The Dark Side of the All-American... 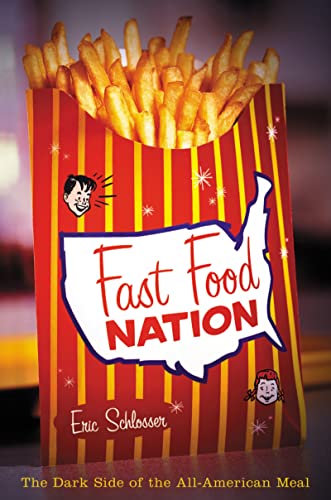 Fast Food Nation: The Dark Side of the All-American Meal [SIGNED COPY]

Quantity: 1
View all  copies of this book
Buy Used
Price: US$ 24.95 Convert Currency
Shipping: US$ 3.99 Within U.S.A. Destination, rates & speeds
Add to basket

Good in very good dust jacket. SIGNED by author on title page. (signature only). 1st edition, 3rd printing. Slight edgewear to dust jacket. Book has softening to base of spine. Sewn binding. Cloth over boards. With dust jacket. 288 p. Contains: Illustrations. Audience: General/trade. There is a faint stain with rough texture, as if the paper had been rubbed while wet, on the first free endpaper. The local and global influence of the United States fast food industry and the basis of the film by the same name by the author of 'Reefer Madness' and 'Chew On This'. Rare signed. Where possible, all books come with dust jacket in a clear protective plastic sleeve, sealed in a ziplock bag, wrapped in bubble wrap, shipped in a box. Seller Inventory # Alibris.0006001

Title: Fast Food Nation: The Dark Side of the ...

Synopsis:
Are we what we eat?
To a degree both engrossing and alarming, the story of fast food is the story of postwar Amerca. Though created by a handful of mavericks, the fast food industry has triggered the homogenization of our society. Fast food has hastened the malling of our landscape, widened the chasm between rich and poor, fueled an epidemic of obesity, and propelled the juggernaut of American cultural imperialism abroad. That's a lengthy list of charges, but Eric Schlosser makes them stick with an artful mix of first-rate reportage, wry wit, and careful reasoning.
Schlosser's myth-shattering survey stretches from the California subdivisions where the business was born to the industrial corridor along the New Jersey Turnpike where many of fast food's flavors are concocted. He hangs out with the teenagers who make the restaurants run and communes with those unlucky enough to hold America's most dangerous job -- meatpacker. He travels to Las Vegas for a giddily surreal franchisers' convention where Mikhail Gorbachev delivers the keynote address. He even ventures to England and Germany to clock the rate at which those countries are becoming fast food nations.
Along the way, Schlosser unearths a trove of fascinating, unsettling truths -- from the unholy alliance between fast food and Hollywood to the seismic changes the industry has wrought in food production, popular culture, and even real estate. He also uncovers the fast food chains' efforts to reel in the youngest, most susceptible consumers even while they hone their institutionalized exploitation of teenagers and minorities. Schlosser then turns a critical eye toward the hot topic of globalization -- a phenomenon launched by fast food.
FAST FOOD NATION is a groundbreaking work of investigation and cultural history that may change the way America thinks about the way it eats.
Review:
On any given day, one out of four Americans opts for a quick and cheap meal at a fast-food restaurant, without giving either its speed or its thriftiness a second thought. Fast food is so ubiquitous that it now seems as American, and harmless, as apple pie. But the industry's drive for consolidation, homogenization, and speed has radically transformed America's diet, landscape, economy, and workforce, often in insidiously destructive ways. Eric Schlosser, an award-winning journalist, opens his ambitious and ultimately devastating exposé with an introduction to the iconoclasts and high school dropouts, such as Harlan Sanders and the McDonald brothers, who first applied the principles of a factory assembly line to a commercial kitchen. Quickly, however, he moves behind the counter with the overworked and underpaid teenage workers, onto the factory farms where the potatoes and beef are grown, and into the slaughterhouses run by giant meatpacking corporations. Schlosser wants you to know why those French fries taste so good (with a visit to the world's largest flavor company) and "what really lurks between those sesame-seed buns." Eater beware: forget your concerns about cholesterol, there is--literally--feces in your meat.

Schlosser's investigation reaches its frightening peak in the meatpacking plants as he reveals the almost complete lack of federal oversight of a seemingly lawless industry. His searing portrayal of the industry is disturbingly similar to Upton Sinclair's The Jungle, written in 1906: nightmare working conditions, union busting, and unsanitary practices that introduce E. coli and other pathogens into restaurants, public schools, and homes. Almost as disturbing is his description of how the industry "both feeds and feeds off the young," insinuating itself into all aspects of children's lives, even the pages of their school books, while leaving them prone to obesity and disease. Fortunately, Schlosser offers some eminently practical remedies. "Eating in the United States should no longer be a form of high-risk behavior," he writes. Where to begin? Ask yourself, is the true cost of having it "your way" really worth it? --Lesley Reed

Most of our books are autographed. Many started out as part of our personal collections that we ran out of space for or acquired duplicates of. We love books and treat them with respect, and always describe them as accurately as we are able. Where possible, all books come with dust jacket in a clear protective plastic sleeve, sealed in a ziplock bag, wrapped in bubble wrap, shipped in a box.

RETURNS are cheerfully accepted when initiated within 30 days. of the estimated delivery date. We ship out within 1-2 business days and U.S. Standard Shipments usually arrive within 6-9 business days, Priority 3-6. We want you to be satisfied with the book you order. We strive to describe each book accurately and individu...