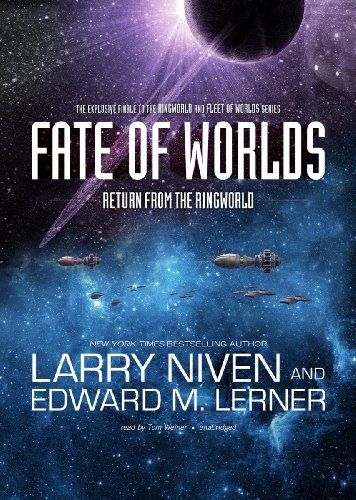 Fate of Worlds: Return from the Ringworld (Ringworld series, Book 5)

The explosive finale to the 'Ringworld' and the 'Fleet of Worlds' series.

For decades, the spacefaring species of known space have battled over the largest artifact -- and grandest prize -- in the galaxy: the all-but-limitless resources and technology of the Ringworld. Now, without warning, the Ringworld has vanished, leaving behind three rival war fleets.

If the fallen civilization of the Ringworld can no longer be despoiled of its secrets, the puppeteers will be forced to surrender theirs -- everyone knows that they are cowards. But the crises converging upon the trillion puppeteers of the Fleet of Worlds go far beyond even the onrushing armadas.

Adventurer Louis Wu and the exiled puppeteer known only as Hindmost, marooned together for more than a decade, escaped from the Ringworld before it disappeared. And throughout those years, as he studied Ringworld technology, Hindmost has plotted to reclaim his power.

One way or another, the fabled puppeteer race may have come to the end of its days.

From the Back Cover: Praise for the Fleet of Worlds series

"A new Known Space book, particularly one with new information about Puppeteers and their doings behind the scenes of human history, needs recommending within the science fiction community about as much as a new Harry Potter novel does -- well, anywhere. But Niven and Lerner have produced a novel that can stand on its own as well as part of the Known Space franchise."
-- Locus

"A far-future SF mystery/adventure set two centuries before the discovery of the Ringworld by humans ... Intriguing human and alien characters and lucid scientific detail."
-- Library Journal

"Larry Niven and Edward M. Lerner have teamed up to write the prequel [to Ringworld], and it's well worth reading whether you've read Ringworld and its subsequent books or not."
-- SFRevu.com

"As we have long expected from Niven, it's a great read, and Lerner -- as Analog readers know -- has the knack as well. You'll enjoy this one."
-- Analog Science Fiction and Fact

Praise for the Works of Larry Niven

"The premier hard SF writer of the day."
-- The Baltimore Sun

"For three and a half decades, nobody's done it better than Larry Niven."
-- Steven Barnes

"Suspense and action enough to fuel any thriller, and even to drive it to the big screen."
-- SFRevu on Small Miracles

1. Fate of Worlds - Return from the Ringworld