Home Corner, John K. My Father in His Suitcase 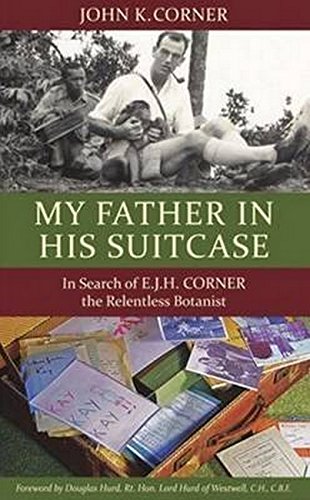 My Father in His Suitcase

After 46 years, John Corner faces his estranged father in a suitcase marked: 'For Kay, wherever he might be.' The letters, pictures and other memorabilia that spill out led him to search for the father he hardly knew, resulting in an engaging and frank biography of an eminent scientist who put science above all, including his family. Num Pages: 452 pages, 48pp plates. BIC Classification: PST; WNC. Category: (G) General (US: Trade). Dimension: 215 x 137 x 30. Weight in Grams: 736. . 2014. Paperback. . . . . Books ship from the US and Ireland. Bookseller Inventory # V9789814189477

Synopsis: John (Kay) Corner left home in 1960, aged 19. He would never see his father, E. J. H. Corner, again. Edred John Henry Corner was one of the most colourful and productive biologists and mycologists of the 20th century. His career began in 1929 as Assistant Director of the Straits Settlements Singapore Botanic Gardens, where he trained monkeys to collect specimens from the treetops of the rainforest, and published Wayside Trees of Malaya, a classic field guide interspersed with his delightful and idiosyncratic observations on plant life. He was key in the creation of Bukit Timah Nature Reserve, a 163- hectare plot that contains more tree species than the whole of North America. When war came, he considered it his responsibilty to safeguard the scientific and cultural collections of Singapore during the Japanese Occupation, but was branded by some as a collaborator. Post-war, after heading the ambitious UNESCO Hylean Amazon Project, he returned to Cambridge University and was appointed Professor of Tropical Botany in 1965. There he propounded his theory that the Durian represented an ancestral type of angiosperm tree. He was elected a Fellow of The Royal Society, where he promoted the conservation of tropical forests and led expeditions to the British Solomon Islands and Mount Kinabalu. For the latter, he proposed Kinabalu Park which led to its designation as a UNESCO World Heritage Site. After 46 years, John Corner faces his estranged father in a suitcase marked: 'For Kay, wherever he might be.' The letters, pictures and other memorabilia that spill out led him to search for the father he hardly knew, resulting in an engaging and frank biography of an eminent scientist who put science above all, including his family.

From the Author: My book was published in Singapore on 1/11/2013. I was invited to be the visiting speaker on that Friday. Afterwards I signed copies and learned (from the director of the Gardens) that the audience was a record for the Friday Visiting Speaker series and my publisher told me that books sold and signed was a record for such an event.

I was pleased I could talk to many and learn about their interest for I had wondered if 'my story', for mine is intertwined, had interest beyond a particular 'audience'.
Reviews have been written for the International Mycological Association by Professor Dr. David Hawksworth CBE, and for The Japan Society by Sir Hugh Cortazzi GCMG.

Sir Hugh reviewed my father's book of his time in Singapore during the occupation; that review was published in 1982. The book was published by Heinemann Asia late in 1981. Sir Hugh was the British Ambassador to Japan (1980 to 1984).


Professor James Mayall reviewed it for the Sidney Sussex College (monthly) "Pheon" and a shorter one for the college Annual (2014). James is a retired Professor of International Relations and fellow of Sidney and also editor of the College Annual. James told me; Pheon does not generally publish book reviews, but this is such an extraordinary book that we felt it right to make an exception.

Here are some post-publication comments sent directly to me:

I have just finished reading your book: You did a fine job!

Professor Duncan Poore, who was on the 2nd Kinabalu expedition with my father, wrote in August 2014;

I received your book a fortnight ago. What a phenomenal achievement. I am reading it with great interest and fascination. Thank you for it.

It is a riveting read, even if harrowing at times, though I had to spread out the reading of it over three sittings, to allow for eating and sleeping...

I have just re-read your book and now write to send my warmest congratulations.
I knew of course that you were putting all your energy into it and am delighted at the result.
You have found that Uncle John had a fine prose style... You have inherited this. You write plainly and with sincerity; the book is a pleasure to read.

Professor Kevin Kenneally AM wrote in November 2013. He is Professor at the Centre for Regional Development in Western Australia.

Your talk and the launch can only be described as superb! I'm sure your father would have been very proud of your presentation and the book. Irene and I felt so privileged to be able to attend and be part of such a great historic event...

I have just finished reading your book and no doubt I shall be reading it again. In my humble opinion it is very well written and I had to ration my reading each day so as not to read it too quickly, but of course I did, so will have to read it again. I found it absolutely riveting...

It is an outstanding effort for you and means a lot to botanical history...

I've just finished reading your book...it is an excellent read - so many insights on the life of such a noted botanist and colleagues, combined with a compelling story of troubled family life and discovery, at times difficult, for yourself.
As an active field botanist, I was taken by your empathetic treatment of your father's accomplishments in this field, despite the underlying turmoil... Congratulations.

Roger Hicks, my contemporary and friend from Twyford School days, and a retired solicitor, wrote in January 2014.

I am still somewhat breathless contemplating the massive undertaking you have so successfully completed. It is only now that I fully appreciate what a difficult task you set yourself: trying to reconcile the public face of an internationally renowned botanist, honoured both at home and abroad, with the private face of the same individual who seems to have deliberately alienated many of his professional colleagues, his friends and, worst of all, those whom he should have held most dear, namely his immediate family.
Thus, I am humbled by your generosity of spirit towards your father, given his neglect of your mother and at least two, if not all three, of her children.

I must congratulate you on your magnum opus which was both moving and interesting. I hope you are proud of it and that Belinda has now got you back! I can see what a difficult and emotional catharsis it must have been not only for you but for the rest of the family. But you have, I hope, exorcised the demons.
I wish I had known your mother; she seems to be a real heroine, when one considers what she went through in the vicissitudes of war and not just at your father's hands.
Many, many thanks for the book; it is in many ways a story that Trollope could have written in its family twists and turns.

Mr Yeo Hock Yew wrote to me in January 2014. As an "ordinary reader", as he signed off, this is important for it tells me that my book is striking a chord with the 'ordinary' person and not just scientists.

Congratulations and thank you for writing "My Father in His Suitcase". It is a sad story for it tells about a brilliant father you did not know in your youth. But it is a triumphant story too because with the venture of writing the book you found him in your senior years. Perhaps your father had meant this book as a legacy to be created by his son. In doing so he showed up an excellent writer in his son. Leaving you Pandora is then such an unusual enterprise.
Your book will hold a special place in the hearts of many readers in Singapore. For though the family drama took place far away in England and Brazil, Singapore was probably where your father was shaped and formed, here among the plants he studied so assiduously during the most turbulent period of the country's history when Singapore became Syonan-to. His name will endure here at the Botanic Gardens, in a way that there will be a Corner that is forever Singapore.

David Whitaker wrote in February 2014. David was Head Prefect at The Leys in my last year (1954).

I have just finished your excellent biography of your father. I am very impressed with that you have achieved. The work you must have put in is immense. There was a great deal that was very interesting scientifically but I was predominantly sad for you - and for him - for what you missed from someone who was clearly capable of inspiring affection and loyalty in some people around him. What a pity he could not extend that to his family!
I remember going to your home with you once. I have always remembered an awkward atmosphere, mainly in your sisters, and I remember being in awe of your father but hindsight is a wonderful thing!!

At long last, I am reading your book... I can hardly bear to put it down. I love it... I love your writing and expect to spend the rest of the evening gulping it down...it is hugely sad but I hope the book has had a wide audience - because it is in the same speed-read reaction as a thriller...
You have written it so well, and so carefully too.

1. My Father in His Suitcase: In Search of EJH Corner the Relentless Botanist

Book Description Landmark Books, Singapore, 2013. Paperback. Condition: As New. 6-7-16 (illustrator). First edition. Since Wallace the Malay peninsula and archipelago have probably had more than their fair share of single minded, ground breaking and irascible botanists. EJH Corner fitted well into the tradition being allowed to stay in his beloved Singapore Botanical Gardens by the Japanese and being honoured by the Emperor, but managing to rehabilitate himself to be appointed Professor of Tropical Botany at Cambridge after the war. In this biography his son, who never saw his father again after leaving the parental home at 19, pieces together an extraordinary life and comes to terms with a father whom he and many of his father's colleagues barely knew. 431 pages. Please see scanned photos for a list of the chapters. Weight: 0.8.kg. * Post free within Malaysia. Seller Inventory # ML2295

2. My father in his suitcase: in search of E.J.H. Corner, the relentless botanist

3. My Father in His Suitcase (Paperback)

Book Description 2014. Paperback. Condition: New. Paperback. John (Kay) Corner left home in 1960, aged 19. He would never see his father, E. J. H. Corner, again. Edred John Henry Corner was one of the most colourful and productive.Shipping may be from our Sydney, NSW warehouse or from our UK or US warehouse, depending on stock availability. 452 pages. 0.734. Seller Inventory # 9789814189477

4. My Father in His Suitcase (Paperback)

Book Description 2014. Paperback. Condition: New. Paperback. John (Kay) Corner left home in 1960, aged 19. He would never see his father, E. J. H. Corner, again. Edred John Henry Corner was one of the most colourful and productive biologists .Shipping may be from multiple locations in the US or from the UK, depending on stock availability. 452 pages. 0.734. Seller Inventory # 9789814189477

5. My Father In His Suitcase

6. My Father in His Suitcase