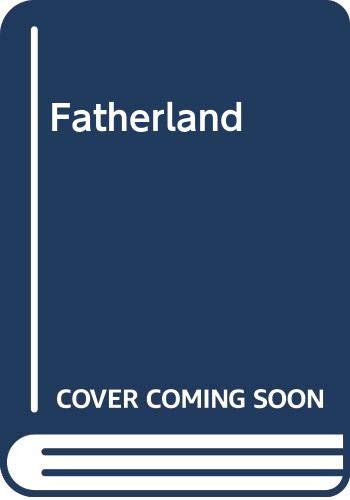 Synopsis: Fatherland is set in an alternative world where Hitler has won the Second World War. It is April 1964 and one week before Hitler's 75th birthday. Xavier March, a detective of the Kriminalpolizei, is called out to investigate the discovery of a dead body in a lake near Berlin's most prestigious suburb.

As March discovers the identity of the body, he uncovers signs of a conspiracy that could go to the very top of the German Reich. And, with the Gestapo just one step behind, March, together with an American journalist, is caught up in a race to discover and reveal the truth -- a truth that has already killed, a truth that could topple governments, a truth that will change history.
From the Paperback edition.

About the Author: Robert Harris was born in Nottingham in 1957 and is a graduate of Cambridge University. He has been a reporter on the BBC's Newsnight and Panorama programmes, Political Editor of the Observer, and a columnist on The Sunday Times. He is the author of five non-fiction books in addition to his bestselling fiction, which includes Archangel, Enigma and Fatherland. He lives in Newbury, Berkshire.
From the Paperback edition.

Book Description Random House Value Publishing. Hardcover. Condition: Good. A copy that has been read, but remains in clean condition. All pages are intact, and the cover is intact. The spine may show signs of wear. Pages can include limited notes and highlighting, and the copy can include previous owner inscriptions. At ThriftBooks, our motto is: Read More, Spend Less. Seller Inventory # G0517117215I3N00

Book Description Random House Value Publishing, 1994. Condition: Good. A+ Customer service! Satisfaction Guaranteed! Book is in Used-Good condition. Pages and cover are clean and intact. Used items may not include supplementary materials such as CDs or access codes. May show signs of minor shelf wear and contain limited notes and highlighting. Seller Inventory # 0517117215-2-4