Items related to Few Comforts or Surprises : The Arkansas Delta 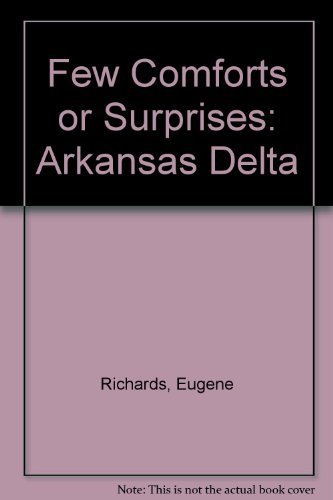 Minor edge and corner wear, covers are scuffed and scratched, tape over a tear in the spine and near the bottom front corner, magazine clippings about the author are taped to the inner front cover page and to the first page, overall a very clean, collectible first edition! Very very scarce and hard-to-find! Extremely collectible and out-of-print! Richards first book containing over 100 black and white photographs of some of the poverty stricken areas of the Arkansas Delta in Southeastern Arkansas! "Eugene Richards is to be congratulated and his book not only to be treasuerd, but acted upon for long overdue social change. The only unfortunate major mistake is the cover. It is of a black girl desperately using a white doll's head for a mask. Not only is the symbolic importance of her gesture completely out of keeping with the rest of the book, but its use as a lead shot gives a completely misleading direction to the book's actual content." Size: 8vo - over 7ľ" - 9ľ" tall. Bookseller Inventory # 014370

Eugene Richards first came to the southeastern part of Arkansas—the so-called Delta—in 1968 as a VISTA volunteer. After nearly two years in that organization working to set up a daycare center and recreation programs, he and some of his associates in it left to found RESPECT Inc., a private social-action program providing paralegal services, publishing a community newspaper, and distributing food and clothing in West Memphis (across the Mississippi River from Memphis, Tennessee).

As he lived and became increasingly involved in the black community, Richards, a skilled photographer, began to use his camera to record what he observed—not only the poverty and suffering of these people but also their laughter, contemplation, and triumphs. His subjects range from children at play to an African-style wedding to scenes of work and home life. Death, religion, and imprisonment are major elements of Delta existence, and so of these photos.

The 110 photographs collected here express the quality of life in a part of the South where 60 percent of the black families barely earn $2000 a year, and 70 percent of the dwellings are deteriorated and without plumbing. Richards' camera catches the cotton compresses, the cement mill, the broken fields and small cafes, Logan the mortician, the two blind brothers Willy and Isaiah McCowan, and the Reverend Ezra Greer at the state capitol in Little Rock, while his few but carefully chosen words complement these images. Together they hold the people and the place in a world that Richards feels "slipping by, while I merely observed its disappearance.

"I feared being only eyes, only a cameraman," he says, but through his camera his eyes become ours, and the power of his feelings, ours too.