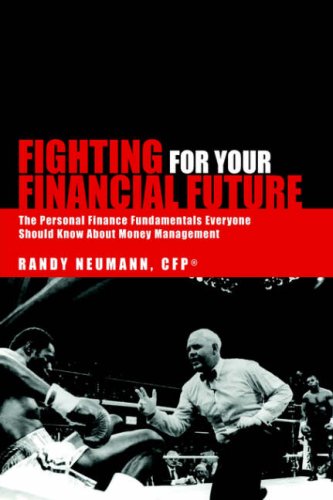 Fighting For Your Financial Future

Synopsis: The former Top Ten Heavyweight boxer, now a leading CERTIFIED FINANCIAL PLANNERTM practitioner and syndicated financial columnist, tells you how to get in shape for the fight of your life: Your Financial Life "Randy's straight from the shoulder advice is just what many investors need, but seldom receive." William G. Flanagan, former senior editor, Forbes magazine, recently published Dirty Rotten CEOs (Citadel, 2004) "So compulsively readable you won't even know you're getting financial advice from a top pro." Dyan Machan, contributing editor, Forbes magazine "Over the course of three decades in boxing, Randy Neumann has earned a reputation as an honest craftsman who sets high standards for himself and lives up to them. Those who know Randy from the sweet science expect the same from his work as a financial planner. Fighting For Your Financial Future is a step toward the fulfillment of that expectation." Thomas Hauser, Author of Missing and Muhammad Ali: His Life and Times - Both nominated for the Pulitzer Prize and the National Book Award

About the Author: RANDY NEUMANN, a graduate of Fairleigh Dickinson University, achieved a world ranking and came within one bout (a loss to top-ranked challenger Chuck Wepner) of a title fight against Muhammad Ali in the 1970s. After retiring from boxing, Randy worked as a commercial banker and became a financial planner in 1979. Randy earned the Certified Financial PlannerTM practitioner designation in 1983 and was admitted to the Registry of Financial Planning Practitioners in 1984. He was an instructor for the National Institute of Finance, where he prepared candidates for the CFP® designation. His personal finance columns-Financial Fitness and Keep Punching-have run in The Bergen Record and The Ridgewood News, respectively, along with other regional and local newspapers. He has written articles for Forbes, The New York Times, Harper's, New Jersey Lawyer, Microsoft Moneyinsider, and other publications. He is a frequent seminar speaker and has talked about financial planning on MSNBC's Moneyline and many other local and network television programs. Randy has developed and written extensively on his firm's sophisticated asset allocation system for managing clients investments, which is based on the Nobel Prize-winning Modern Portfolio Theory. He continues to be involved in boxing; he set up a worldwide pension plan for professional boxers through the International Boxing Federation, and he referees local fights in New Jersey as well as championship fights around the world. Randy is currently a member of the board of directors of F.I.S.T. (Fighters' Initiative For Support And Training). About The Author The information in this book is extensive. You can use it to sound glib at the water cooler, on the golf course or at a cocktail party. But that would not be it's best use. Instead, use it to improve your life. The information contained in this book will provide you with the questions to ask, and motivate you to find an advisor you can

1. Fighting for Your Financial Future : The Personal Finance Fundamentals Everyone Should Know about Money Management

Book Description Xlibris Corporation LLC. Paperback. Condition: Very Good. A copy that has been read, but remains in excellent condition. Pages are intact and are not marred by notes or highlighting, but may contain a neat previous owner name. The spine remains undamaged. At ThriftBooks, our motto is: Read More, Spend Less. Seller Inventory # G1599260433I4N00

2. Fighting For Your Financial Future

Book Description Xlibris, 2006. Condition: Good. A+ Customer service! Satisfaction Guaranteed! Book is in Used-Good condition. Pages and cover are clean and intact. Used items may not include supplementary materials such as CDs or access codes. May show signs of minor shelf wear and contain limited notes and highlighting. Seller Inventory # 1599260433-2-4