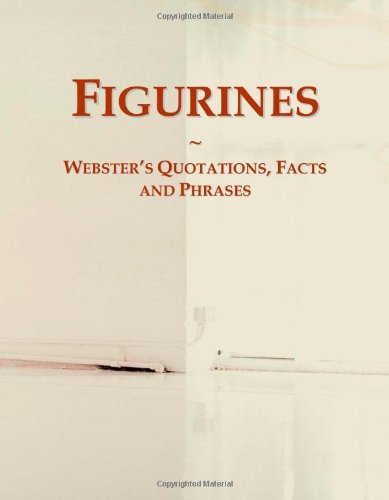 Synopsis: Ever need a fact or quotation on "figurines"? Designed for speechwriters, journalists, writers, researchers, students, professors, teachers, historians, academics, scrapbookers, trivia buffs and word lovers, this is the largest book ever created for this word. It represents a compilation of "single sentences" and/or "short paragraphs" from a variety of sources with a linguistic emphasis on anything relating to the term "figurines," including non-conventional usage and alternative meanings which capture ambiguities. This is not an encyclopedic book, but rather a collage of statements made using the word "figurines," or related words (e.g. inflections, synonyms or antonyms). This title is one of a series of books that considers all major vocabulary words. The entries in each book cover all parts of speech (noun, verb, adverb or adjective usage) as well as use in modern slang, pop culture, social sciences (linguistics, history, geography, economics, sociology, political science), business, computer science, literature, law, medicine, psychology, mathematics, chemistry, physics, biology and other physical sciences. This data dump results in many unexpected examples for "figurines," since the editorial decision to include or exclude terms is purely a computer-generated linguistic process. The resulting entries are used under license or with permission, used under fair use conditions, used in agreement with the original authors, or are in the public domain.

Excerpt. © Reprinted by permission. All rights reserved.: Use in Literature

More than one figurine lifts its delicate head from a block of rough stone behind it; more than one fantastic flower is merely indicated by chiselled touches on the abandoned stone, though dampness has since laid its blossoms of mouldy greenery upon it.
–Honoré de Balzac in Catherine de Medici (tr Katherine Prescott Wormeley).

This girl, a Parisienne, seemed formed on the model of a figurine of Tanagra.
–Th. Bentzon (Mme. Blanc) in Jacqueline, vol 1.

It was now that he began to take a keen interest in objects of art, pictures, bronzes, little carvings and figurines, for his cabinets, pedestals, tables, and etageres.
–Theodore Dreiser in The Financier.

On one of these a kneeling figurine in bronze holds up the effigy of the child within; on another the epitaph plays tenderly with the fate of a little princess, who died in her first year.
–William Dean Howells in Their Silver Wedding Journey, by William Dean Howells.

She had all the delicate grace of that Tanagra figurine that you have in your studio, Basil.
–Frances Parkinson Keyes in The Old Gray Homestead.

Here also are figures representing the arts of literature, sculpture and music, by the familiar symbols, a lamp, a statuette and a lute.
–Shelden Cheney in Art-Lovers guide to the Exposition.

He glanced from the statuette to the window, with a sudden doubt which set his heart throbbing fast.
–Wilkie Collins in Armadale.

Luca Lomi called Fabio to him as she went away, and Father Rocco, turning to the statuette, looked to see how the plaster was hardening on it.
–Wilkie Collins in After Dark.

The statuette of Niobe still stood on its bracket, and the French window still opened on the garden.
–Wilkie Collins in Armadale.
...