Items related to The Finding of the Grail: Retold from Old French Sources 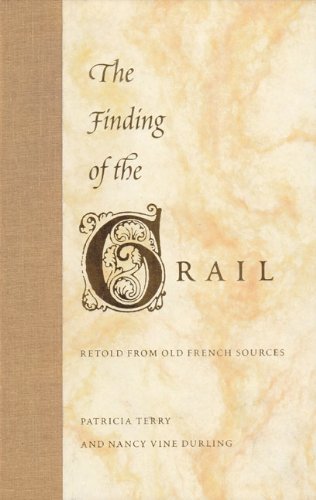 The Finding of the Grail: Retold from Old French Sources

Title: The Finding of the Grail: Retold from Old ...

This retelling of the Medieval Grail legend presents a unified version, based on orginal texts, of the hero Perceval's quest. The text is illustrated with 34 miniatures from 13th- and 14th-century manuscripts, offering a concise version of a fascinating myth.

"A new romance that is astonishingly effective and true to its models, virtually seamless. . . . This is a fresh, lively, and historically informed retelling of the Perceval story as the French nobility of the 12th and 13th centuries might have known it, in one tight and exciting version. The glory of the translation is the tone, the register, in which it is realized."--F. Regina Psaki, director of medieval studies, University of Oregon

"Readily accessible to nonacademics . . . it should appeal to anyone interested in the medieval sources of Arthurian narrative. . . . a good story well told."—Christopher J. Callahan, Illinois Wesleyan University

This lively retelling of the medieval Grail legend presents a unified version of the hero Perceval’s quest. Illustrated with 34 miniatures from 13th- and 14th-century manuscripts, it offers a concise and coherent version of a myth that has fascinated readers for more than 800 years.

The earliest extant grail story is by the great 12th-century French poet Chrétien de Troyes, who introduces the mysterious vessel in a solemn procession witnessed by the young knight Perceval in the Castle of the Fisher King. Chrétien never finished his story, but a number of 12th- and 13th-century writers wrote continuations of it, adding episodes that prolonged the quest but did not offer a coherent conclusion.

Weaving together episodes selected from the earliest Old French texts and focusing exclusively on the adventures of Perceval, the authors have created a "new" romance true to Chrétien de Troyes’ delicate blend of Christian themes and Celtic magic, offering a conclusion in keeping with Chrétien’s balanced view of human aspirations. Illustrating key moments in the story, the miniatures help create the elusive atmosphere of medieval fantasy.

Patricia Terry has taught French and comparative literature at Barnard College and at the University of California, San Diego. Her translations of medieval texts include The Song of Roland, Poems of the Elder Edda, The Honeysuckle and the Hazel Tree, and Renard the Fox.

Nancy Vine Durling has taught French and comparative literature at the University of California, Santa Cruz, and at Florida Atlantic University in Boca Raton. She is the editor of Jean Renart and the Art of Romance: Essays on Guillaume de Dole (UPF, 1997) and the cotranslator (with Patricia Terry) of The Romance of the Rose, or Guillaume de Dole by Jean Renart.