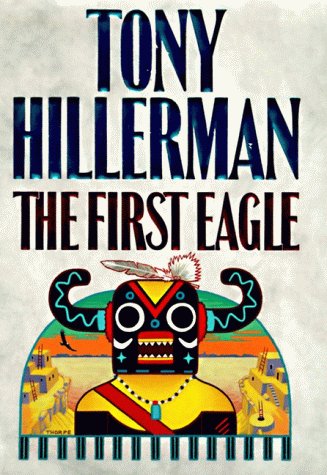 Synopsis: They very plague that decimated Europe in the fourteenth century lurks today in the high, dry land of the American Southwest. But Navajo Tribal policeman Jim Chee and his mentor, Joe Leaphorn, discover an even deadlier killer stalking the reservation in the most chilling and beautifully crafted novel yet from the beloved and bestselling master of Southwestern suspense.

When Acting Lt. Chee catches a Hopi eagle poacher literally red-handed--huddled over the bloody body of a young Navajo Tribal police officer--he has an open-and-shut case. Even the Feds--usually at odds with Chee'agree, and it seems the Hopi is headed for the gas chamber. Until Joe Leaphorn shows up to blow Chee's case wide open.

Leaphorn, now retired form the Navajo Tribal Police, has been hired to find Cathy Pollard, a hot-headed biologist who disappeared from the same remote area on the same day the Navajo cop was murdered. Is she a suspect? A victim? And what are Chee and Leaphorn to make of the report that a skinwalker--a Navajo witch--was seen in the same area at the same time?

To answer these questions, Leaphorn and Chee must immerse themselves in the enigmatic web of scientists hunting the key to the most virulent form of bubonic plague since the Middle Ages.

In addition to its finely wrought plot, The First Eagle offers a wealth of Tony Hillerman's signature gifts--glorious evocations of the high desert, delicately drawn characters, and eloquent insights into the foibles and wisdom of the Southwest's native people.

Review: It seems like July 8 is going to be a bad day for Acting Lieutenant Jim Chee. He's got a stack of overdue paperwork on his desk. Anderson Nez has died of plague, but the circumstances around the death are murky. His ex-fiancée, Janet Pete, is returning from Washington, D.C., and Chee doesn't know what to think about her last letter. (Will they be getting married this time?) And Officer Benny Kinsman's unwanted advances have enraged Catherine Pollard (among others), one of the scientists studying this newest outbreak of the black death. Now, the hot-headed Kinsman's gone off to nab a Hopi man who's poaching eagles. When Chee is called to back Kinsman up at Yells Back Butte, the bad day turns worse. He finds the young Hopi, Robert Jano, standing over Benny's mortally wounded body. Jano insists that he did not kill the police officer. Add to all this Joe Leaphorn's separate investigation, also involving July 8. Joe's got a new role as consulting detective to the wealthy--investigating the July 8 disappearance at Yells Back Butte of the same Catherine Pollard who was dogged by Kinsman.

This one bad day and the ensuing days of investigation bring Joe Leaphorn and Jim Chee together once again as they uncover the secret of Yells Back Butte, plague fleas, and skinwalkers. As usual, Hilllerman's ear for dialogue is remarkable. One does not read Leaphorn and Chee's words and thoughts as much as hear them. While the book invites new readers (little knowledge of the previous books in the series is presumed), one has the sense of entering an old neighborhood where friends and relations are established and emotions run deep. Jim Chee's pain is vivid as he struggles under the shadow of Leaphorn and questions the "rusty trailer" lifestyle that has driven him apart from Janet. Nothing is contrived in his mixture of fear and elation when he and Janet meet again.

Hillerman has written an engaging novel that once again evokes the land and people of the Southwest while also confronting the cultural separateness of the region from the power centers of the East. Already honored for his previous work (Dance Hall of the Dead received the Edgar), The First Eagle is a welcome addition to the beloved Chee-Leaphorn series that began in 1971 with The Blessing Way. --Patrick O'Kelley

6. The First Eagle (A Leaphorn and Chee Novel)