Items related to A Flamboyance, A Crash, and A Dazzle

Home Susan R. Stoltz A Flamboyance, A Crash, and A Dazzle
Stock Image 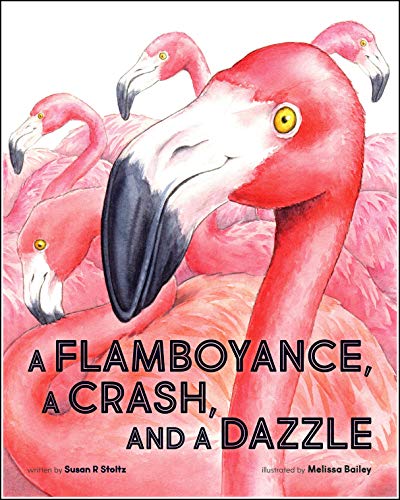 A Flamboyance, A Crash, and A Dazzle

Title: A Flamboyance, A Crash, and A Dazzle

A delightful book about the words describing groups of animals. From a Mess of iguanas to a Flamboyance of flamingos this rhyming book will delight all audiences. Endorsed by several award winning authors, actors, and news anchors A Flamboyance, A Crash, and A Dazzle is entertaining, enchanting, and informative for children and adults alike.

Susan Stoltz has had many writing opportunities throughout her varied career including journalism, editing, autobiography, short story, newsletter and magazine publishing, as well as children's books. She was a columnist and journalist for an award winning newspaper in Wyoming, The Glenrock Bird. She has written for several magazines nationwide including Open Range, Florida Bird Magazine, Women Out West, and was most recently published in Wild Times the magazine for the Phoenix Zoo. She has also been a featured speaker at several writers conferences including Writing the Rockies at Western State Colorado University, Ozark Creative Writers Conference, Eureka Springs, Arkansas and Women Writing The West, Denver, Colorado