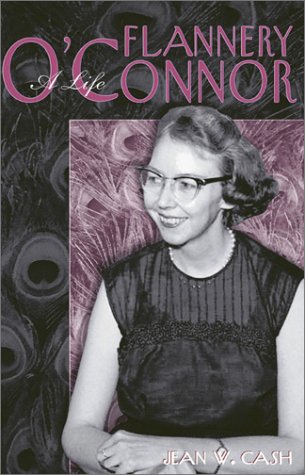 A new biography of the literary legend reconstitutes her life, from her pampered childhood through experiences at the Yaddo writer's colony in Saratoga and her subsequent struggle with lupus. (BIography)

Flannery O’Connor (1925–1964) ranks among the foremost writers of fiction in American literature. Her short stories, in particular, are considered models of the form. Born in Savannah, O’Connor spent most of her life in Georgia and infused her work with southern characters, themes, and landscapes. A devout Catholic, she addressed the mystery of God’s grace in everyday life, often amid the grotesque, the shocking, and the violent. In this first full-length biography of the writer, Jean W. Cash draws upon extensive interviews with O’Connor’s friends, relatives, teachers, and colleagues as well as on the writer’s voluminous correspondence to provide a sensitive, balanced portrait of a fascinating woman.

As Cash demonstrates, O’Connor’s sheltered childhood, extraordinary intellect, spiritual certainty, and unique personality—including a wry sense of humor—combined not only to make her something of an outsider but also to foster her literary genius. As a child, her favorite activities were reading, writing stories, and drawing. Perhaps more unusual was her childhood feat of teaching a rooster to walk backwards. Her passion for exotic fowl later found expression in the peacock symbolism in her fiction.

The family moved to Milledgeville, Georgia, in 1938, and there O’Connor attended high school and college. She left the South in 1945 and entered the graduate writing program at the University of Iowa, where she completed several chapters of her first novel, Wise Blood. She went on to live at the Yaddo writers’ colony in Saratoga Springs, New York, and she might have spent her most creative years in the North if illness had not interfered. However, lupus—the same disease that had killed her father—forced her to return to Milledgeville, where she lived and wrote for the remaining fourteen years of her life under the protective care of her mother.

The latter chapters of Cash’s biography address O’Connor’s adjustment to her debilitating illness and to a more circumscribed existence. As Cash explains, she learned to accommodate her mother’s insular outlook, and in many ways her fiction profited artistically during this period. Her friendships and active correspondence added to the variety and vitality of her life. She also traveled widely on the lecture circuit and reviewed books for a local Catholic publication. Even in her illness and relative isolation in Milledgeville, O’Connor continued to live a richly rewarding and creative life.

The Author: Jean W. Cash is professor of English at James Madison University.