Items related to Florida's Farmworkers in the Twenty-first Century... 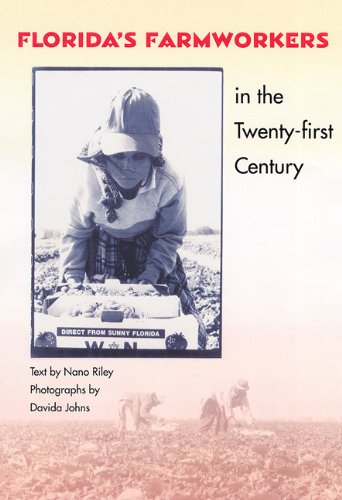 Florida's Farmworkers in the Twenty-first Century (Florida History and Culture)

Title: Florida's Farmworkers in the Twenty-first ...

"Historically, farmworkers have been among the most exploited of America's many laboring groups. They are not forgotten people, but they are indeed America's most ignored. In a book of significant social importance, Nano Riley and Davida Johns remind us, with honesty and passion, of Florida's own 'harvest of shame'." --Jack Davis, University of Alabama at Birmingham

"Hidden in parts of rural Florida is a way of life that has more in common with the 19th century than the 21st. Nano Riley and Davida Johns shine a much-needed spotlight on the sometimes horrific working conditions faced by tens of thousands of people."--Robert Lorei, news director, WMNF Radio, Tampa

In a book that combines both oral history and documentary photography, Nano Riley and Davida Johns tell the story of Florida's farmworkers in the 21st century. Largely ignored by mainstream America, migrant laborers often toil under adverse labor and living conditions to provide the nation's food supply. Intimate photographs and lucid text offer a look not only into the difficulties faced by these laborers but also into the rich cultural heritages of their communities and the close ties of their family life.

Until now, most publications on migrant farm labor focused on California or the Southeast in general, offering little information on conditions particular to farmworkers in Florida. Florida's Farmworkers focuses on the history of Florida agriculture, the unique climate, ecology, crops, and working conditions that distinguish the situation of Florida's farm laborers from those in other states. Organized thematically, the book explores the issues facing these migrant workers, who are largely Hispanic, Haitian, and from other regions of the Caribbean. Among the issues addressed are low wages, children's problems, education, substandard living conditions, health, pesticide exposure, and immigrant smuggling. Riley and Johns draw attention to a labor system greatly in need of reform.

Nano Riley is a freelance journalist living in St. Petersburg, Florida. Davida Johns is an award-winning photographer, currently serving in the Peace Corps in Belize.

Nano Riley is a freelance journalist living in St. Petersburg, Florida. Davida Johns is an award-winning photographer, currently serving in the Peace Corps in Belize.