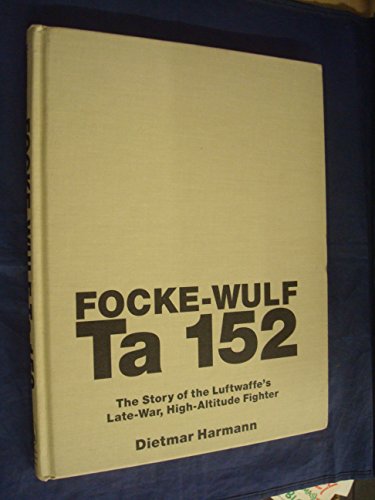 Synopsis: From the time of its appearance in 1939 the Focke-Wulf Fw 190 was one of the best fighter aircraft of the Second World War – a masterpiece produced by chief designer Kurt Tank. In 1943 he developed a new fighter aircraft based on this successful concept. The project soon deviated far from the original Fw 190 concept and as an honor to the designer it was designated the Ta 152. The great performance potential of this fighter was obvious from the very first prototypes of the Ta 152A and Ta 152C. Unfortunately, however, production was limited to a few examples. But at the same time Focke-Wulf was developing the Ta 152H high-altitude fighter which, powered by the Jumo 213E and equipped with a pressurized cockpit, was capable of reaching altitudes on the order of 35,000 feet and speeds in excess of 430 mph. A few Ta 152Hs saw action at the beginning of 1945 and they made an excellent impression on their pilots. Compared to the older fighters they exhibited significantly better flight characteristics and performance at high altitude. The Ta 152 could also stand up to the best Allied fighter aircraft, such as the American P-51 Mustang. On account of its unfamiliar shape the pilots of Bf 109s sometimes mistook it for an enemy aircraft and attacked. The heavy Allied bombing at the end of the war prevented production from beginning as planned, and as a result only a very few Ta 152Hs could be delivered. With the aid of a large number of photographs – some previously unpublished – and drawings, this book details the development history of the Ta 152, one of the most advanced fighter aircraft of its day. But it also illustrates the hopelessness of Germany’s efforts late in the war to deploy advanced aircraft in large numbers.

Book Description Schiffer, 1999. Condition: Good. A+ Customer service! Satisfaction Guaranteed! Book is in Used-Good condition. Pages and cover are clean and intact. Used items may not include supplementary materials such as CDs or access codes. May show signs of minor shelf wear and contain limited notes and highlighting. Seller Inventory # 0764308602-2-4

7. Focke-Wulf Ta 152 The Story of the Luftwaffe's Late-War, High-Altitude Fighter