Items related to Forgotten Peace: Reform, Violence, and the Making of... 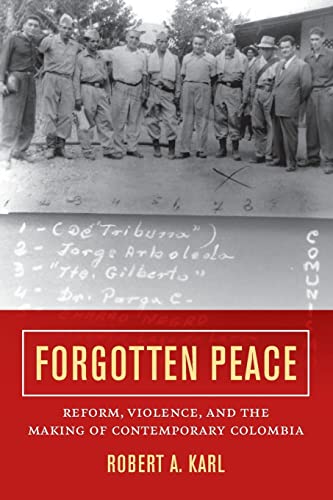 Forgotten Peace examines Colombian society’s attempt to move beyond the Western Hemisphere’s worst mid-century conflict and shows how that effort molded notions of belonging and understandings of the past. Robert A. Karl reconstructs encounters between government officials, rural peoples, provincial elites, and urban intellectuals during a crucial conjuncture that saw reformist optimism transform into alienation. In addition to offering a sweeping reinterpretation of Colombian history—including the most detailed account of the origins of the FARC insurgency in any language—Karl provides a Colombian vantage on global processes of democratic transition, development, and memory formation in the 1950s and 1960s. Broad in scope, Forgotten Peace challenges contemporary theories of violence in Latin America.

“The remarkable strength of this book is its lucid, intelligent, artful narratives. Chapter after chapter, Karl takes scattered local and national actors and creates a stunningly integrated and compelling story about what he conceives of as the rise and fall of an effort at forging a national peace in Colombia during the complex period of 1957 to 1964. This is historical storytelling at its best.”—Paul Gootenberg, Stony Brook University

“Forgotten Peace provides a sweeping reinterpretation of the mid-twentieth-century conflicts that became known as La Violencia, with important implications for peace efforts today. In a vivid narrative that traces the interactions of local actors, intellectuals, and the Colombian state, Karl provides an entirely new explanation for the emergence of the FARC guerrillas from an ambivalent and fragmented peace process.”—Nancy P. Appelbaum, author of Mapping the Country of Regions: The Chorographic Commission of Nineteenth-Century Colombia