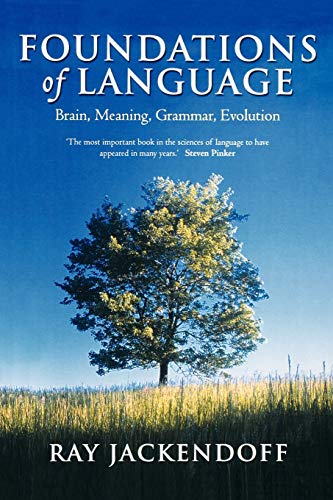 Synopsis: Already hailed as a masterpiece, Foundations of Language offers a brilliant overhaul of the last thirty-five years of research in generative linguistics and related fields. "Few books really deserve the cliché 'this should be read by every researcher in the field,'" writes Steven Pinker, author of The Language Instinct, "But Ray Jackendoff's Foundations of Language does."
Foundations of Language offers a radically new understanding of how language, the brain, and perception intermesh. The book renews the promise of early generative linguistics: that language can be a valuable entree into understanding the human mind and brain. The approach is remarkably interdisciplinary. Behind its innovations is Jackendoff's fundamental proposal that the creativity of language derives from multiple parallel generative systems linked by interface components. This shift in basic architecture makes possible a radical reconception of mental grammar and how it is learned. As a consequence, Jackendoff is able to reintegrate linguistics with philosophy of mind, cognitive and developmental psychology, evolutionary biology, neuroscience, and computational linguistics. Among the major topics treated are language processing, the relation of language to perception, the innateness of language, and the evolution of the language capacity, as well as more standard issues in linguistic theory such as the roles of syntax and the lexicon. In addition, Jackendoff offers a sophisticated theory of semantics that incorporates insights from philosophy of language, logic and formal semantics, lexical semantics of various stripes, cognitive grammar, psycholinguistic and neurolinguistic approaches, and the author's own conceptual semantics.
Here then is the most fundamental contribution to linguistic theory in over three decades.

About the Author:
Ray Jackendoff is Professor of Linguistics at Brandeis University. A Fellow of the American Academy of Arts and Sciences, president elect of the Linguistic Society of America, and past president of the Society for Philosophy and Psychology, he is the author of Semantics and Cognition, Consciousness and the Computational Mind, and The Architecture of the Language Faculty.

Book Description Paperback. Condition: Good. Connecting readers with great books since 1972. Used books may not include companion materials, some shelf wear, may contain highlighting/notes, may not include cdrom or access codes. Customer service is our top priority!. Seller Inventory # S_304920863

Book Description Condition: Good. A+ Customer service! Satisfaction Guaranteed! Book is in Used-Good condition. Pages and cover are clean and intact. Used items may not include supplementary materials such as CDs or access codes. May show signs of minor shelf wear and contain limited notes and highlighting. Seller Inventory # 0199264376-2-4

Book Description Condition: Fair. Independent family-run bookstore for over 50 years! Buy with confidence! Book is in acceptable condition with wear to the pages, binding, and some marks within. Seller Inventory # bk0199264376xvz189zvxacp

Book Description Paperback. Condition: Very Good. The book has been read, but is in excellent condition. Pages are intact and not marred by notes or highlighting. The spine remains undamaged. Seller Inventory # CIN000933605

Book Description Paperback. Condition: Good. 1st Edition. Ships in a BOX from Central Missouri! May not include working access code. Will not include dust jacket. Has used sticker(s) and some writing or highlighting. UPS shipping for most packages, (Priority Mail for AK/HI/APO/PO Boxes). Seller Inventory # 000715315U

Book Description Condition: Good. This is an ex-library book and may have the usual library/used-book markings inside.This book has soft covers. In good all round condition. Please note the Image in this listing is a stock photo and may not match the covers of the actual item,850grams, ISBN:9780199264377. Seller Inventory # 8288195

Shipping: US$ 28.35
From Netherlands to U.S.A.
Destination, rates & speeds