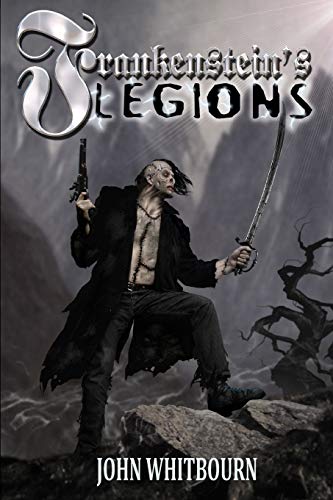 This epic steampunk horror novel by John Whitbourn follows the fortunes (and otherwise) of Julius Frankenstein, nephew of the infamous scientist, and Ada Lovelace, pioneer computer programmer, as they evade assassins, spies and resurrected soldiers in their quest to solve a murder... Ada's murder, that is!

Victor Frankenstein fashioned just one creature from the remnants of the dead, but the governments who have hijacked his discoveries see the advantage of resurrection on an industrial scale. What better way to fight their never-ending wars than with armies of obedient soldiers, recycled from the body parts left over from earlier battles? And how better to silence their own citizens who protest at ceaseless conflict and plundered graveyards?

Set in the 1830s, Frankenstein's Legions details an alternative history in which power over life and death is a reality, a science revived by a second and even more fanatical French Revolution. The republican regime, inspired by zeal and desperation, has swept over Europe, employing inexhaustible swarms of lazaran troops. The remaining independent nations, including England, are obliged to shed their scruples and likewise raise lazaran armies.

Across this crazed and Gothic history stride Julius Frankenstein, soldier nephew of the notorious scientist; Charles Babbage inventor of the proto-computer Difference Engine; and the Honourable Augusta Ada, Countess of Lovelace, genius daughter of Lord Byron. Pulling their strings - they believe - are the puppetmasters Talleyrand, French statesman par excellence and now a renegade in English employ; and Sir Percy Blakeney, sometime Scarlet Pimpernel and current head of the British Secret Service.

Meanwhile, the French have been unwise enough to revive their recently deceased Emperor. The intention was simply to pick the brain of history's foremost military mind. However, the risen Emperor Napoleon is developing fresh ambitions of his own.

"Whitbourn's wit is both unforced and splendidly droll." - The Daily Express

"He doesn?t cheat, and he doesn't soften the edges." - Mary Gentle

About the Author: John Whitbourn has had nine novels published in the UK, USA and Russia since winning the BBC & Victor Gollancz First Fantasy Novel prize with A Dangerous Energy in 1991. His works have received favourable reviews in The Times, Telegraph, and Guardian, amongst others, and he is widely regarded as one of the pioneers of the New Weird. Most recently, his published novels include the Downs-Lord trilogy concerning the establishment of empire in an alternative, monster-ridden England, and Frankenstein’s Legions, a sort-of steampunk sequel to Mary Shelley’s seminal science fiction work, in which the techniques of creating life from the dead are turned to political ends. A former archaeologist and British civil servant, he lives in at least one of the several parallel Binscombes, of which he says: “The scenery and backdrop to the stories may be seen and experienced, in Binscombe itself, and Farncombe and Compton and Godalming and Guildford and Epsom and elsewhere. The inspiration for them lives on, independent and blissfully ignorant of me.” John adds, “All that a reader need know about me is that I’m struggling up the shore of middle age, living with my wife, Liz, my son, Joseph and daughters, Rebecca and Esther, in a part of the south country where the graveyards and old records are littered, over the last four centuries or so, with strangers bearing my surname. Beyond that there is silence, but I suspect we go back still further.”

Book Description CreateSpace Independent Publishing Platform. Paperback. Condition: As New. An apparently unread copy in perfect condition. Dust cover is intact; pages are clean and are not marred by notes or folds of any kind. At ThriftBooks, our motto is: Read More, Spend Less. Seller Inventory # G1478341548I2N00