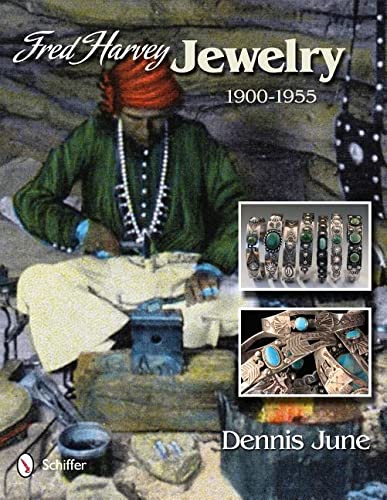 Synopsis: A must-read, exhaustive ten-year study of early 1900s "Fred Harvey" souvenir Indian jewelry, viewed through the prism of the silver Indian bracelet, a stalwart of collectability and time. The author introduces clarifying terminology such as "hybrid," what it is, where it comes from, and what it means.
The distinguished Fred Harvey Company is central in the comprehensive research and is its main character. The author dug deep into authoritative books, establishing a trusty foundation for many surprising discoveries and revelations.
From the earliest Ingot Silver specimen to the last nickel silver replica, the book weaves
a colorful first-hand picture of two opposing forces  . . . Authentic vs. Souvenir . . .
The book illustrates in depth how these forces became embroiled in a century-long struggle for honesty and truth. And one hundred fifty nifty color photos give readers the first real "inside" look at Fred Harvey Jewelry.
The storyline clarifies a widely distorted view of the souvenir, spotlights a surprising fiscal brotherhood, and chronicles how American culture overran the Southwestern American Indian. Included is a comprehensive Chronology of significance. Dozens of insightful tips and tricks will help readers better analyze silver Indian jewelry on their own.
This fact-filled book will infuriate some eBayers but will make immediate friends with:

From the Author: Like many others, I cast aside dozens of early century souvenir bracelets in my day. Despite that, a seed of curiosity was set by our family friends. Natch.
We shall call them the Chambers: it was they who asked our opinion of a silver bracelet we had never before seen. It was lightweight but had a magnificent Number Eight spiderweb turquoise stone. They showed us the eBay link from which it originated. It was difficult coughing up the words to tell them their "find" was souvenir, despite the stellar turquoise gemstone and otherwise claims of eBay's seller.
This incident continues in the first two paragraphs of my book Preface. And my self-imposed ten-year odyssey began that very day; a seed of curiosity that blossomed into a fully inflamed passion, "Fred Harvey Jewelry," a term I'd never heard before eBay. So eBay became the arrow point of my curiosity, beginning with that very link to the Chambers' auction win.
"What?," I wondered, "is Fred Harvey Jewelry?"
Having been in the "Indian business" for nearly a half century, souvenir jewelry once comprised a steady revenue source for our own family Indian stores. We called them souvenir bracelets, so as to define them for buyers. When a youngster, we called them "Railroad bracelets" because they seemed to come from the train culture. But eBay called them "Fred Harvey bracelets." I was, indeed, curious . . .
Yes, I admit a hands on education with the souvenir jewelry of the early fifties and later. We sold a ton of it. In many months, it was first among many curios which mostly paid the bills. We later drifted into an Indian Gallery mode, abandoning machined goods, including the best selling souvenir Indian jewelry.
The Chambers' bracelet ignited a youthful flame in my soul. My early curiosities (also related in the book) were rekindled when a memorable and specific "Pretty Girl" bracelet reappeared fifty years after the first time I'd seen it. That beautiful machined bracelet, along with others in an Oregon antique mall, inflamed a fervor that has shaped our lives to this day.
Studies have shown that souvenir silver Indian jewelry has seeped into a majority of the vintage Indian jewelry collections. That they would be confused with authentic silver Indian bracelets is no surprise. What IS surprising, is that otherwise well educated collectors found the same value in Fred Harvey bracelets as they did authentic handmade ones.
As patterns arose among the many collections studied, the book started weaving its own tale. The fifty-five year study-span revealed many subways that had to be reconnected through the Fred Harvey platform. More questions appeared than were answered. Many theories were debunked, some one hundred eighty degrees. Others were confirmed. The words of over fifty leading authors helped assemble details and fill gaps. But the bracelets told the story. And I am happy Schiffer Publishing shared my enthusiasm for my study of Fred Harvey Jewelry by publishing this wonderful volume. And my photos. Thank you. Enjoy!