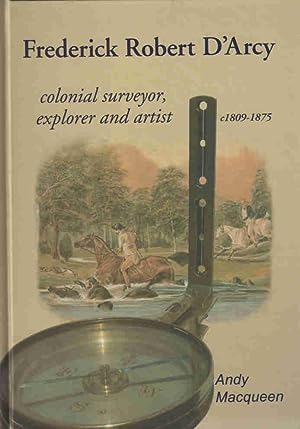 Quarto; hardcover; 272pp., with many maps, monochrome illustrations and 16pp. of full-colour plates. New. Postage quoted is for a standard format octavo book. Final charges may vary depending on size and weight. Frederick D'Arcy arrived in New South Wales in 1828 and embarked upon a long career as a surveyor. Descended from a long line of military antecedents, he threw himself into a long and arduous work routine, surveying country that few other cartographers until that point had dared attempt. Much of his greatest efforts were centred around the Colo River country - a tangled and tortuous wasteland at that point - and his maps helped open that territory up to further settlement and cultivation. But it was not only the landscape which threatened him with disaster: recalcitrant convicts, mutinous assistants and the demands of his long-suffering wife and children all played their part in his unfolding story. There are those who would say that he was, in part, his own worst enemy, becoming embroiled in scandals and disputes in such far-flung parts of the opening territories as Tasmania and in Queensland; however, some say that much of this notoriety was the invention of his superior officer, the domineering Major Mitchell. Andy Macqueen pulls all of the threads of this man's story together into one coherent narrative, ably marshalling his facts together to support his case that D'Arcy may well have been cruelly defamed (as much as he was prone to gambling and drinking). Along the way he reveals several intriguing paintings and ink drawings now attributed to the surveyor, including an early portrait of a Port Phillip Aboriginal man, discovered by the author. 9780646533599. Seller Inventory # 60032