Home Robert Levine Free Ride: How the Internet Is Destroying the Culture Business ... 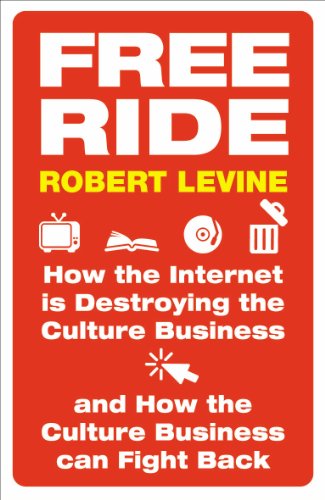 Synopsis: On the one hand information wants to be expensive, because it's so valuable. The right information in the right place just changes your life. On the other hand, information wants to be free, because the cost of getting it out is getting lower and lower all the time. So you have these two fighting against each other.' So said the influential technologist Stewart Brand at a 1984 hacker convention. Not only did his words evolve into a media business mantra that has shaped the internet as we know it today but the conflict which he predicted has led to a revolution in the way that our culture is disseminated and consumed. Over the last decade the traditional media - newspapers, music, television, films and books - have been systematically ransacked by digital organisations. Every media business has had to contend with the growing consumer demand for free online content. As it is currently configured, both technically and legally, the Internet allows technology companies to reduce the price of content to zero by letting them build businesses with content copyrighted by others. It's a very effective way to draw an audience. MySpace attracted a user base larger than the population of most European countries, in part by letting its audience stream music, then sold itself to News Corporation for $580 million. But what are the consequences for cultural businesses? Is the result simply mayhem and inevitable cultural impoverishment? Free Ride is the essential guide to a global marketplace in transition: where we are, how we got here and what we have to do to avoid cultural meltdown.

About the Author: Robert Levine was the executive editor of Billboard and has written for Vanity Fair, Rolling Stone, and the arts and business sections of the New York Times. Before that, he was a features editor at New York magazine and Wired. He holds a B.A. in politics from Brandeis and an M.S.J.from Northwestern University's Medill School of Journalism. He now covers the culture business from New York and Berlin. Free Ride is his first book.

Book Description Bodley Head 04/08/2011, 2011. Hardcover. Condition: Very Good. Shipped within 24 hours from our UK warehouse. Clean, undamaged book with no damage to pages and minimal wear to the cover. Spine still tight, in very good condition. Remember if you are not happy, you are covered by our 100% money back guarantee. Seller Inventory # 6545-9781847921482

Book Description Bodley Head, 2011. Hardcover. Condition: Used; Good. Page colour - ?discoloured in accordance with book age. **Simply Brit** Shipped with Premium postal service within 24 hours from the UK with impressive delivery time. We have dispatched from our book depository; items of good condition to over ten million satisfied customers worldwide. We are committed to providing you with reliable and efficient service at all times. Seller Inventory # 3007055

Book Description Bodley Head, 2011. Hardcover. Condition: Used; Good. **SHIPPED FROM UK** We believe you will be completely satisfied with our quick and reliable service. All orders are dispatched as swiftly as possible! Buy with confidence!. Seller Inventory # mon0002227614

Book Description -. Hardcover. Condition: Very Good. Free Ride: How the Internet Is Destroying the Culture Business and How the Culture Business Can Fight Back This book is in very good condition and will be shipped within 24 hours of ordering. The cover may have some limited signs of wear but the pages are clean, intact and the spine remains undamaged. This book has clearly been well maintained and looked after thus far. Money back guarantee if you are not satisfied. See all our books here, order more than 1 book and get discounted shipping. Seller Inventory # 7719-9781847921482

Book Description Bodley Head, 2011. Condition: Good. This is an ex-library book and may have the usual library/used-book markings inside.This book has hardback covers. In good all round condition. Dust Jacket in good condition. Seller Inventory # 7812411

Book Description Bodley Head. Hardcover. Condition: Very Good. Item is in very good condition. If supplemental codes/CDs for textbooks are required please contact us prior to purchasing as they may be missing. Seller Inventory # DS-1847921485-2