Items related to On Freedom, Love, and Power: Expanded Edition 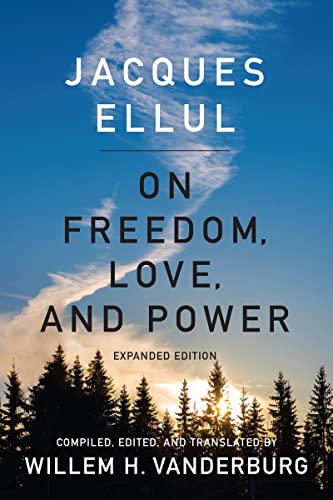 This expanded edition of Ellul's talks features additional material, previously unavailable, that focuses on Christianity's potential service to humanity as a community that exemplifies a society where people are reconciled with one another and with God. Editor(s): Vanderburg, Willem H. Num Pages: 324 pages. BIC Classification: HRCG; HRCM. Category: (P) Professional & Vocational; (U) Tertiary Education (US: College). Dimension: 154 x 231 x 25. Weight in Grams: 512. . 2015. Expanded. Paperback. . . . . Books ship from the US and Ireland. Bookseller Inventory # V9781442629066

One of the most important and original thinkers of the twentieth century, Jacques Ellul (1912–1994) was a noted sociologist, historian, law professor, and self-described “Christian anarchist.” At the University of Bordeaux, Ellul taught and wrote extensively on the relationship between technology and contemporary culture, the tenets of the Christian faith, and the principles of human freedom and responsibility. On Freedom, Love, and Power is the transcription of a series of talks given by Ellul in 1974 in which he refines and clarifies some of his most controversial insights on the Jewish and Christian Bibles and their relevance to contemporary society.

This expanded edition of Ellul’s talks features additional material, previously unavailable, that focuses on Christianity’s potential service to humanity as a community that exemplifies a society where people are reconciled with one another and with God.

Willem H. Vanderburg is the founding director of the Centre for Technology and Social Development and is now Professor Emeritus at the University of Toronto.