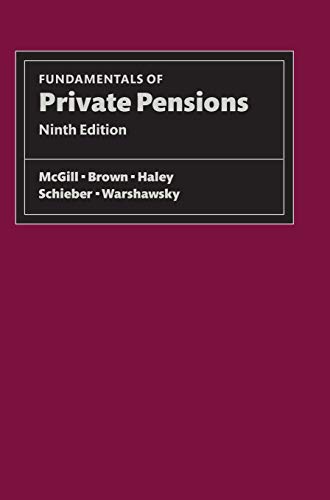 Synopsis: For more than five decades, Fundamentals of Private Pensions has been the most authoritative text and reference book on retirement plans in the United States. The ninth edition is completely updated and reflects recent developments in retirement plans including the passage of the US Pension Protection Act of 2006 (PPA), the widespread shift toward hybrid and defined contribution plans, and a burgeoning economics and finance research literature on retirement and retirement plans. The volume is organized into eight main sections so the reader may use the volume as a text, a research tool, or a general reference.

Section I (Chapter 1) introduces the historical evolution of the pension movement and the underlying forces that shaped its progress. Section II (Chapters 2 and 3) explains how employer-provided pensions fit into the patchwork of the U.S. retirement income security system, especially Social Security. The section also includes a discussion of the economics of tax incentives and their effect on retirement plan offerings and the structure of the benefits provided. Section III (Chapters 4 through 9) lays out the economic role of retirement plans--their design, workforce incentives, plan finances, production of adequate retirement income, possibilities for phased retirement, and the risk of outliving pension assets. Section IV (Chapters 10 through 13) examines the various forms of defined benefit and defined contribution plans, including hybrid plans, in terms of their structure, requirements, and operations. Section V (Chapters 14 through 20) lays out the regulatory environment in which plans operate; this extensive material has been especially updated to reflect PPA, and the reams of associated guidance and implementing regulations. Section VI (Chapters 21 through 25) explores the funding and accounting rules under which private defined benefit plans operate; this section also reflects the new PPA rules. The penultimate section (Chapters 26 through 28) includes a complete revamping of chapters on risk management and investments applicable to retirement plans. The section describes modern portfolio theory and its broad implications for retirement investing, and in two separate chapters, specific implications for defined benefit and defined contribution plans. The final section (Chapter 29) concludes the text with a discussion of the future of retirement plans in the United States and around the world--a particularly timely subject in light of the extreme financial volatility experienced in 2008 and the pending retirement of the baby boom generation.

About the Author:
Dan McGill is Professor Emeritus of Insurance at the University of Pennsylvania's Wharton School, during which time he chaired the Department of Insurance, directed the Pension Research Council, and directed the Huebner Foundation. Previously, he held academic positions at the University of Tennessee, University of North Carolina, and Stanford University. Dr. McGill's research focused on the areas of insurance, pensions, employee benefits, automobile insurance, and social security. He served on several corporate boards, and as consultant to the International Monetary Fund and the World Bank, the US Treasury, the Federal Reserve System, the US Army, and the US Congress. Dr. McGill received the Ph.D. from the University of Pennsylvania and the MA from Vanderbilt.

Kyle N. Brown is an attorney with the Towers Watson Worldwide Research and Innovation Center in Arlington, VA specializing in employee benefits where he works in the Research and Innovation Center. He is a member of the North Carolina and District of Columbia Bar and is admitted to the United States Supreme Court and Tax Court Bar. Mr. Brown is a co-author of the 7th and 8th editions of Fundamentals of Private Pensions. Mr. Brown also wrote the Tax Management Portfolios General Nondiscrimination Testing and Permitted Disparity in Qualified Plans, and Specialized Qualified Plans--Cash Balance, Target Benefit, Age-weighted and Hybrids, and co-authored the Tax Management Portfolio Employee Benefits for Tax-Exempt Organizations. In addition to numerous periodical articles, Mr. Brown currently is an Editorial Advisor for the Journal of Pension Planning and Compliance and the BNA Compensation and Benefits Guide.

John J. Haley is President, Chief Executive Officer and Chairman of the Board of Towers Watson Worldwide, a global human resources and financial management consulting firm headquartered in Washington, D.C. Mr. Haley started career as consulting actuary to several of Towers Watson's largest clients; subsequently he was named to the Board of Directors and became CEO of the firm. Mr. Haley is a Fellow of the Society of Actuaries and a Fellow of the Conference of Consulting Actuaries. He is a Trustee of The Actuarial Foundation. He holds an A.B. in mathematics from Rutgers College, and received a Fellowship for two years of study at the Graduate School of Mathematics at Yale University. Mr. Haley also serves on the Board of Directors of the U.S.-China Business Council, MAXIMUS and Hudson Highland.

Sylvester J. Schieber, a private consultant, has been a member of the US Social Security Advisory Board and became Chairman in 2006; he served previously on the Social Security Advisory Council. For more than 20 years he worked in Towers Watson Worldwide's benefit practice where he set up and managed Towers Watson's Research and Information Center; thereafter he served as Director of North American Benefits Consulting and Towers Watson's Board of Directors and retired in September 2006. Previously he was the first research director at the Employee Benefits Research Institute in Washington, DC and worked at the Social Security Administration where he was deputy director of the Office of Policy Analysis. He holds a Ph.D. in Economics from the University of Notre Dame. Dr. Schieber has authored or edited 10 books on changing demographics, retirement security, and health issues, and he has also written numerous journal articles and policy analysis papers on retirement and health benefits issues.

Mark J. Warshawsky is Director of Retirement Research at Towers Watson Worldwide, a global human capital consulting firm. He serves on the Social Security Advisory Board and on the Advisory Board of the Pension Research Council of the Wharton School. Previously he served as assistant secretary for economic policy at the U.S. Treasury Department. During his tenure, he played a key role in the development of the Administration's pension reform proposals, particularly pertaining to the funding of single-employer defined benefit plans which formed the basis of the Pension Protection Act (PPA) of 2006. Dr. Warshawsky's research led directly to the regulatory reform of minimum distribution requirements for qualified retirement plans. He is the inventor of the life care annuity, a product innovation integrating the immediate life annuity and long-term care insurance; for that research, Dr. Warshawsky won a prize from the British Institute of Actuaries.

Book Description Oxford University Press 2010-01-03, 2010. Hardcover. Condition: Good. Item is in good condition. Some moderate creases and wear. This item may not come with CDs or additional parts including access codes for textbooks. Might be an ex-library copy and contain writing/highlighting. Seller Inventory # DS-0199544514-3

Book Description Oxford University Press, 2010. Condition: Good. A+ Customer service! Satisfaction Guaranteed! Book is in Used-Good condition. Pages and cover are clean and intact. Used items may not include supplementary materials such as CDs or access codes. May show signs of minor shelf wear and contain limited notes and highlighting. Seller Inventory # 0199544514-2-4

Book Description Oxford University Press, 2010. Hardcover. Condition: GOOD. Has little wear to the cover and pages. Contains some markings such as highlighting and writing. Supplemental materials are not guaranteed with any used book purchases. Seller Inventory # 0199544514_abe_gd

Book Description Oxford University Press, 2010. Hardcover. Condition: VERY GOOD. Pages are intact and are not marred by notes or highlighting, but may contain a neat previous owner name. The spine remains undamaged. Supplemental materials are not guaranteed with any used book purchases. Seller Inventory # 0199544514_abe_vg

Book Description Condition: Very Good. A quality text at a great price. And we ship fast. CDs & Access codes may not be included as is the case with most used books. Seller Inventory # 530071

There are 25 more copies of this book