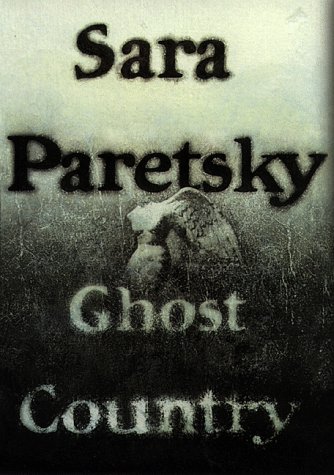 Signed by author on title page in black fountain ink. Sara Paretsky's genius made Chicago private eye V.I. Warshawski a household name. Now, in GHOST COUNTRY, she has written a parable for the millenium, a haunting and powerful novel of magic and miracles, a tale of four troubled people who meet beneath Chicago's shadowy streets--and of the mysterious woman whose sudden appearance during a violent storm changes all of their lives forever. Erotic to some, repellent to others, this woman the street people call Starr never speaks, but begins slowly to transform their lives, and miracles begin to happen in a city completely unprepared for the outcome . Fine, in fine, mylar-protected dust jacket. M28. Bookseller Inventory # 4608

Sara Paretsky's genius made Chicago private eye  V.I. Warshawski a household name.  Now the New York Times bestselling author explores an unseen corner of the city she loves.  In Ghost Country she has written a parable for the millennium, a powerful, haunting novel of magic and miracles, of four troubled people who meet beneath Chicago's shadowy streets--and of the woman whose mysterious appearance changes all of their lives forever.

They come from different worlds and meet at a time of crisis for all of them.  Luisa, a drunken diva fallen on hard times, discovers on Chicago's streets a drama greater than any she has experienced onstage.  Madeleine, a homeless woman, sees the Virgin Mary's blood seeping through a concrete wall beneath a luxury hotel.  Mara, a rebellious adolescent cast out by her wealthy grandfather, becomes the catalyst for a war between the haves and have-nots as she searches among society's castoffs for the mother she never knew.

In this extraordinary novel, Sara Paretsky gives voice to the dispossessed, to men and women struggling to bury the ghosts of the past, fighting for their lives in a world hungry for miracles, terrified of change.  A magical, unforgettable story of myth and madness, hope and revelation, Ghost Country is Sara Paretsky's most eloquent and ambitious work yet.

Sara Paretsky boldly strays from her widely popular V.I. Warshawski mystery series--note to fans: caveat emptor--and trades the gritty Chicago detective in for a pair of debutante sisters, Mara and Harriet Stonds. The poor little rich girls (grand pa-pa Stonds was a famous neurosurgeon) are blessed with every material comfort, but are sadly lacking in a sound karma-credit plan. Treated like a second-class citizen by her grandfather, Mara forever plays the underdog to "golden" Harriet, an irritatingly perfect girl, reminiscent of "Nellie" from Little House on the Prairie. In a bizarre chain of events, the sisters see the errors of their ways when they become entangled in a complex caper involving a washed-up, drunken opera singer, a posse of homeless women, a soothsayer, a kindly psychotherapist and a selection of twisted clergymen. Abstract and slightly surreal at times, Ghost Country might seem arduous to the tried and true Paretsky fan: it's a far cry from her no-nonsense, cut-and-dried thrillers. However, this atypical character study might prove to be a refreshing pit stop for those with a lot of mystery mileage under their belts; it's a colorful detour from the predictable puzzlers. --Rebekah Warren