Items related to GONE WITH THE WIND: THE DEFINITIVE ILLUSTRATED HISTORY...

Home Bridges, Herb GONE WITH THE WIND: THE DEFINITIVE ILLUSTRATED HISTORY OF THE ...
Stock Image 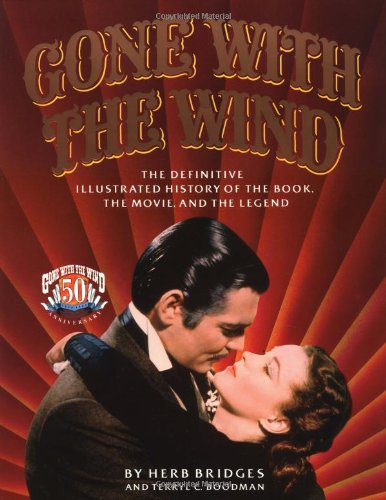 GONE WITH THE WIND: THE DEFINITIVE ILLUSTRATED HISTORY OF THE BOOK,

Title: GONE WITH THE WIND: THE DEFINITIVE ...

Celebrate the 50th Anniversary of an American Classic.

Published in the spring of 1936, Margaret Mitchell's Gone With the Wind was an immediate and overwhelming success; millions of copies were sold in its first year alone. By the time the film opened on December 15, 1939, the anticipation and excitement were so great that the city of Atlanta declared the day an official holiday. Since then, more than 300 million people have seen the film and every year hundreds of thousands of copies of the novel are sold in dozens of languages.

This lavishly illustrated book is the ultimate behind-the-scenes history of the novel, the film, and the phenomenon of Gone With the Wind. It includes wonderful anecdotes, original quotes from the stars and the directors souvenir programs from the original premiere, many rare never-before published photographs, and more, from the smell of the smoke and the heat of the flames during the filming of the "burning of Atlanta" sequence to the soft touch of the red dust at the location Tara; from the fangue on the faces of cast and crew after grueling months of shooting to the thrill of premiere night, you will experience the unfolding drama as if you were there.

Columbia Books opened in 1977 and began selling online in 1991 with the advent of Interloc; we've been selling on abebooks since they first began. We have an eclectic mix of 30,000 books, ephemera and artwork; something for collectors and readers alike.


We accept credit cards, checks, money orders; you may also order directly from us if you like. We are very careful with our descriptions; however books are always returnable if not as described.
Contact details:
Annette Kolling-Buckley
Columbia Books, Inc. ABAA/ILAB
1907 Gordon Street
Columbia, MO 65201
573-449-7417
colbooks@tranquility.net
www.columbiabooksonline.com