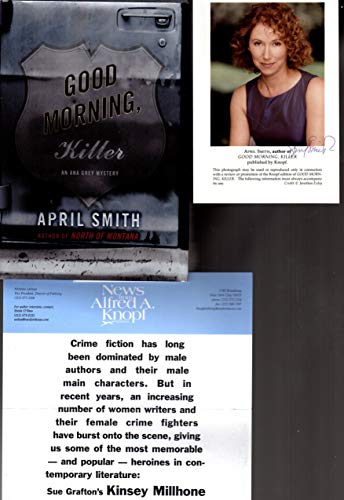 Signed by author on title page. Author of NORTH OF MONTANA, BE THE ONE, and THE JUDAS HORSE. As new, in fine, mylar-protected dust jacket. M43. Bookseller Inventory # 8246

An electrifying new thriller that brings back the complex, strong-willed, often-maverick FBI agent—Ana Grey—whom we first met in the author’s stunning debut novel, North of Montana.

This time Special Agent Grey is working on a kidnapping case—a fifteen-year-old named Juliana has been abducted in Santa Monica. Grey’s counterpart in the Santa Monica Police Department is Detective Andrew Berringer. They’ve worked together before—and they’ve been more than just working together ever since.

It’s Ana’s job “to know the victim as if she were my own flesh and blood.” But when Juliana turns up—traumatized into a state of total and paralyzing terror—it becomes clear that Ana has gone too far: she is viewing her own life from the perspective of Juliana’s blasted emotional terrain. And in a moment of passion (Andrew has betrayed her) and panic (is it possible that he also means to harm her?) Ana points a gun at him and shoots.

Now she is both criminal investigator and criminal as she breaks her bail agreement to continue tracking the abductor, torn between her powerful emotional connection with Juliana and the fraying connection she has to her own common sense and to the truths she knows about Andrew—and about herself.

FBI Special Agent Ana Gray returns in this complex, involving thriller about a dedicated officer's search for a serial rapist that proceeds alongside her passionate and obsessive love affair with a fellow cop, Santa Monica detective Andrew Berringer. Before their relationship culminates in a violent episode that leaves him clinging for life and her accused of attempted murder, the deviant who brutalized the teenage girl Ana has taken into her heart and under her wing has found another victim, and Ana's efforts to stop him before he kills her drive Smith's stunning narrative to a shocking denouement. But the author has additional surprises in store for the reader that involve Andrew's motivations for escalating their passion--to keep Ana from reopening a closed case involving bank robbery, fraud, and deception, which will lead her to reevaluate the man, and the obsession, that has brought her to the brink of personal and professional oblivion. While many authors who feature the same protagonist in all their mysteries simply serve up the same character in different scenarios in each new outing, April Smith expertly illuminates aspects of her heroine's psychological life and devotion to justice that deepen our understanding about who she is--a complicated, brave, multidimensional woman it is a pleasure to meet in this engrossing and powerful novel. --Jane Adams.