Items related to ONE GOOD TURN 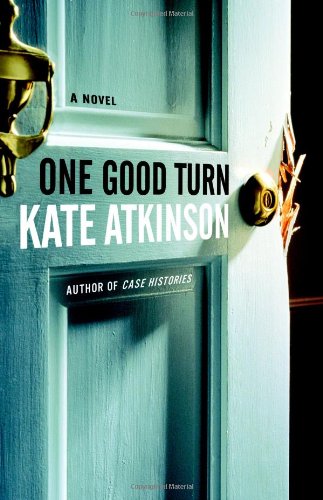 Signed by author on title page in black fountain ink. It is summer, it is the Edinburgh Festival. People queuing for a lunchtime show witness a road-rage incident - an incident which changes the lives of everyone involved. Jackson Brodie, ex-army, ex-police, ex-private detective, is also an innocent bystander - until he becomes a suspect. With CASE HISTORIES Kate Atkinson showed how brilliantly she could explore the crime genre and make it her own. InONE GOOD TURN, she takes her masterful plotting one step further. Like a set of Russian dolls, each thread of the narrative reveals itself to be related to the last. Her Dickensian cast of characters are all looking for love or money and find it in surprising places. As ever with Atkinson what each one actually discovers is their true self. Unputdownable and triumphant, ONE GOOD TURN is a sharply intelligent read that is also percipient, funny, and totally satisfying.Second in the Jackson Brodie mystery series (some of the best writing in all of contemporary fiction) following CASE HISTORIES, and followed by WHEN WILL THERE BE GOOD NEWS. ONE GOOD TURN was a 2007 British Crime Association Crime Thriller of the Year Best Novel nominee. As new, first edition, first printing, in fine, mylar-protected dust jacket.{Not remainder-marked or price-clipped} L108. Bookseller Inventory # 18932

On a beautiful summer day, crowds lined up outside a theater witness a sudden act of extreme road rage: a tap on a fender triggers a nearly homicidal attack. Jackson Brodie, ex-cop, ex-private detective, new millionaire, is among the bystanders.The event thrusts Jackson into the orbit of the wife of an unscrupulous real estate tycoon, a washed-up comedian, a successful crime novelist, a mysterious Russian woman, and a female police detective. Each of them hiding a secret, each looking for love or money or redemption or escape, they all play a role in driving Jackson out of retirement and into the middle of several mysteries that intersect in one sinister scheme.Kate Atkinson "writes such fluid, sparkling prose that an ingenious plot almost seems too much to ask, but we get it anyway," writes Laura Miller for Salon. With a keen eye for the excesses of modern life, a warm understanding of the frailties of the human heart, and a genius for plots that turn and twist, Atkinson has written a novel that delights and surprises from the first page to the last.

Kate Atkinson began her career with a winner: Behind the Scenes at the Museum, which captured the Whitbread First Novel Award. She followed that success with four other books, the last of which was Case Histories, her first foray into the mystery-suspense-detective genre. In that book she introduced detective Jackson Brodie, who reopened three cold cases and ended up a millionaire. A great deal happened in-between.

In One Good Turn Jackson returns, following his girlfriend, Julia the actress, to the Fringe Festival in Edinburgh. He manages to fall into all kinds of trouble, starting with witnessing a brutal attack by "Honda Man" on another man stuck in a traffic jam. Is this road rage or something truly sinister? Another witness is Martin Canning, better known as Alex Blake, the writer. Martin is a shy, withdrawn, timid sort who, in a moment of unlikely action, flings a satchel at the attacker and spins him around, away from his victim. Gloria Hatter, wife of Graham, a millionaire property developer who is about to have all his secrets uncovered, is standing in a nearby queue with a friend when the attack takes place. There is nastiness afoot, and everyone is involved. Nothing is coincidental.

Through a labyrinthine plot which is hard to follow because the points of view are constantly changing, the real story is played out, complete with Russians, false and mistaken identities, dead bodies, betrayals, and all manner of violent encounters. Jackson gets pulled in to the investigation by Louise Monroe, a police detective and mother of an errant 14-year-old. There might be yet another novel to follow which will take up the connection those two forge in this book. Or, Jackson might just go back to France and feed apples to the local livestock.

Atkinson has written an enjoyable and lively story of no degrees of separation among the most unlikely cast of characters. Some plot lines have been left to drift, but it does hang together in a satisfying fashion. --Valerie Ryan